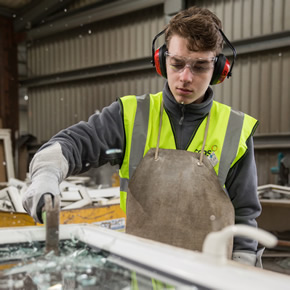 CMS Window Systems has reached the finals of the European Business Awards for the Environment (EBAE), affirming its status as one of Europe’s most sustainable businesses.

The EBAE has been developed to recognise European companies which make a considerable effort to combine environmental considerations and social justice with economic practicality. Every two years, the European Commission awards a prize to the company which has set an example in sustainability.

CMS has been shortlisted in the 2016 ‘management’ category for medium and large companies, following its success in the 2015 VIBES (Vision in Business for the Environment of Scotland) Awards. The overall winner from the four shortlisted companies will be announced at an awards evening in Tallinn.

The Glasgow-based company faces tough competition from three other finalists from Greece, Bulgaria and the Netherlands; it is the only company in the British window and door industry to be nominated.

CMS has advocated energy performance, recycling and sustainable manufacturing since its establishment in 2006. It hopes to impress the judges of the EBAE with a combination of products, processes and ecological initiatives, such as its Innovation Hub.

The Hub was fashioned to showcase the UK’s most advanced and sustainable building envelope products. CMS is also involved in a glass reprocessing initiative, in collaboration with Saint-Gobain Glass.

In addition to its manufacturing and recycling facility at Castlecary, the company operates an additional recycling and office complex in Fife. It also aims to support the local community through its Modern Apprenticeships programme, which creates career opportunities for young people in North Lanarkshire and Fife.