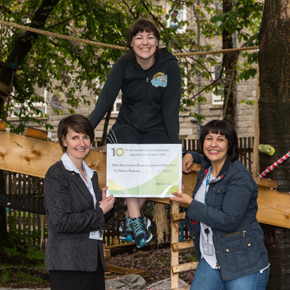 Balfour Beatty nominated the Baltic Street Adventure Playground in Dalmarnock for CMS’s 10-year anniversary charity programme; which will make ten donations of £1,000 each to causes nominated by its customers across the year.

Created in 2013, the adventure playground is a free-of-charge venture which aims to connect local families and children to building a sense of community and actively support children’s physical, social, emotional and developmental well-being.

The area features climbing frames, swings and tunnels, as well as a vegetable garden, campfire and an abundance of materials and tools for children to construct their own dens and hide-outs.

Sarah McMillan, operations manager at Baltic Street Adventure Playground, commented on CMS’s donation: “We’re so pleased to have been nominated for a donation. As a relatively young organisation, much of what we do at the playground relies on collaborative spirit and the support of the community, as well as being able to respond to flux and change as we continue to make the playground the best it can be.

CMS’s contribution will be a great help in making our dream a reality. We’d like to thank CMS for their generosity, and Balfour Beatty for nominating us to receive a donation.”

Stephen Anderson, Aluminium Director at CMS, added: “It was our great pleasure to contribute to the Baltic Street Adventure Playground, and we hope that the organisation is able to benefit from CMS’s donation.

The playground uses its space in Dalmarnock to give back to the community, providing a unique area which will be used by local children to experience the rudiments of construction through play. This ethos really resonates with CMS’s culture of creating community benefits and getting the most out of the resources we have. It makes us proud to give an anniversary donation to this excellent project.”