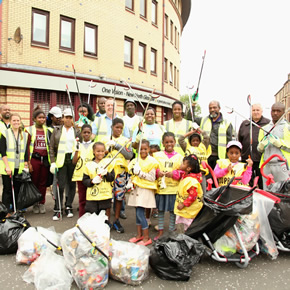 CMS Window Systems has donated to African Challenge Scotland’s Multicultural Summer Event, demonstrating its commitment to celebrating cultural diversity and supporting the communities in which it operates.

African Challenge Scotland is a Glasgow-based voluntary organisation, which aspires to promote solidarity between Scotland’s African communities and its broader population. The charity works to relieve poverty and advance education; it also aims to encourage cultural and sporting links between the country’s ethnic groups.

Every year, its Multicultural Summer Event is held to celebrate African culture in North Glasgow. Bringing together people from different nationalities, ethnicities and backgrounds, the programme features an assortment of activities for the entire community to get involved in.

This year, the week-long event, which took place from 1st – 6th August, was sponsored by CMS Window Systems.

As part of its charity initiative, which was launched to celebrate its first decade in operation, CMS made a contribution of £1,000, after African Challenge Scotland was nominated to receive a donation by one of the company’s esteemed clients, ng homes

CMS began its ‘ten donations for ten years’ initiative with a donation to the Cottage Family Centre in February; it intends to make further endowments to more local causes throughout the year.

The Multicultural Summer Event began at ng homes’ Saracen House office, where Glasgow Caledonian University’s Professor Tahseen Jafry gave an inspired speech on global warming and its effects on the lives of people in both Scotland and Africa.

A series of lectures and panels were given throughout the week: topics such as cultural heritage, sustainability and global citizenship were covered by community leaders, academics and Members of Parliament and Scottish Parliament.

The programme also included a children’s Sports Day and a community clean-up session; it concluded with a Cultural Day at Saracen Park and a sport event at Peugeot Ashfield Stadium. Over 3,000 people participated in the festivities to celebrate cultural diversity and demonstrate their support.