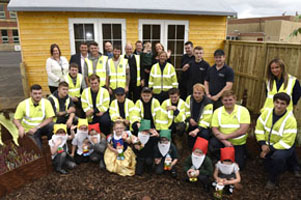 CMS Window Systems have supplied PVCu windows, French doors and entrance doors for a new sensory unit at a school in Kilmarnock for young people with communications disorders and autism.

The building, nicknamed the “Happy Hive”, is designed to provide a calming sanctuary and was created in a mere 40 hours by a team of hard-working apprentices with the support of CMS Window Systems.

The new wooden cabin, garden and sensory facility at Crosshouse Primary School have a Snow White and the Seven Dwarves theme and will cater for 40 children.

The facility went from the design stages to being built and ready to use in super quick time, due largely to the heroic efforts of the 18-strong apprentice team, working for Morrison Construction and its supply chain, plus departments across East Ayrshire Council.

The construction of the new Crosshouse Communications Unit, which is set have a massive impact on the health and wellbeing of the pupils, was undertaken as part of the annual Ayrshire Chamber Modern Apprenticeship Challenge 2017.

Managing Director at CMS Window Systems, Andy Kerr, commented: “The new Crosshouse Communications Unit project was such an exciting project to get involved with, and we were delighted when we were asked to provide our support.

“Its creation has benefited so many groups, including the next generation of tradesmen and women, but most of all the young people who will ultimately use the superb new addition to their school.”