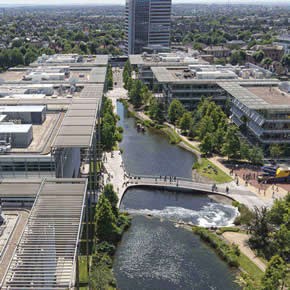 By making use of BIM technology, Prater was able to contribute to the delivery of Chiswick Park, a new commercial development, which is based in West London.

Based near Gunnersbury underground station, the Chiswick Park development has been established on a former brownfield industrial site.

The development offers 140,000 square metres of office space, which spans twelve buildings. A restaurant and bar, swimming pool and fitness centre have also been included in the complex.

Prater’s in-house design team was appointed to adapt the original concepts for the development into detailed designs. The company delivered a range of works for a number of outbuildings, including: prefabricated roof decks, secondary steelwork and structural steelwork.

Prater also made use of Building Information Modelling (BIM) for a plant room in Building 7.

As the main steelwork for Chiswick Park’s building were assembled off site, BIM technology helped to ensure design accuracy; it also helped each phase of the project to remain on schedule.

The Chiswick Park development was completed at the end of 2014.