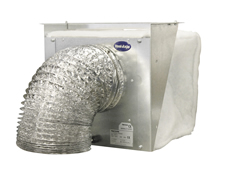 BBA certification is a mark of reliability, safety and quality, which has been developed to provide reassurance that a product is fit for its purpose.

Products and systems must pass a series of laboratory tests, on-site evaluations, inspections of production and quality management checks before the accreditation can be awarded.

PoziDry is a positive input ventilation unit, which has been developed to control condensation within a property; it particularly targets the refurbishment and social housing sector.

It works by drawing fresh air from the atmosphere, which it proceeds to filter. The air is then introduced into the dwelling via a ceiling mounted diffuser.

The clean air replaces humid, moist and stale air through the natural leakage points of a property, such as window mounted trickle vents.

The system utilises a Lo-Carbon technology motor, which offers a reduced carbon footprint and lower noise levels. A specific fan power (sfp) of 0.22 W/I/s can also be achieved.

The PoziDry works to monitor the temperature in a property’s loft; it uses this information to automatically adjust the air volume when necessary.

For instance, if the ambient loft temperature exceeds 27 degrees Celsius, the system will switch itself to standby.

The system can be fitted in a loft space suspended from a beam or joist mounted; the diffuser is normally positioned over the stairwell in a two-storey home, or in a bungalow’s main hall.

The PoziDry also features a Datalogger for the benefit of social housing providers. This records whether a fan is active or idle.

The data logging feature can help landlords to make homes safer for their tenants; for instance, if a fan has been switched off and mould appears, the landlord will realise why.

By helping to avoid condensation and the growth of mould, respiratory problems, allergies and other health issues can be avoided.

The Datalogger can also help to reduce the disrepair costs, which are caused by mould and dampness.