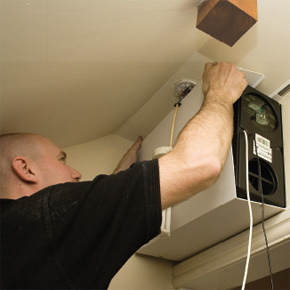 In this month’s issue of PSB Magazine, John Moss, head of social housing sales at EnviroVent, looks at how consideration of a home’s ventilation requirements should go hand-in-hand with carrying out energy efficient upgrades…

A persistent problem for housing maintenance teams, particularly in the colder months, involves dealing with issues caused by condensation and mould growth. As homes have been made more airtight, due to energy efficient upgrades, this has had a direct impact on the internal environment by lowering the quality of the indoor air.

Looking back at the statistics it can clearly be seen where the problem lies – between 2007 and 2012, the number of cavity wall insulation upgrades increased by 31.5% from 8.5m homes to 11.2m homes (59% of properties with a cavity wall).

The number of loft insulation upgrades went from 9.5m to 14.1m, an increase of 48.4% (60% of properties with a loft), while the number of solid wall insulations rose from 65,000 to 122,000. This was largely driven by Government incentives and the Energy Company Obligation (ECO) schemes.

These schemes, in various forms, offered incentives to upgrade or add insulation and improve air tightness in order to reduce levels of carbon emissions from the UK’s existing housing stock.

Many homes have undergone these energy efficient upgrades, often without adequate consideration to improving the ventilation in the property, resulting in tenants facing a whole host of different problems.

Social housing providers are all too aware of the issues that tenants face with poor ventilation – which can worsen respiratory conditions, such as asthma.

Professor Awbi, at the University of Reading, has revealed in his report, Indoor air quality in UK homes and its impact on health, a predicted 80% increase in asthma cases as a direct result of poor indoor air quality.

In a recent survey, 58% of householders said they experienced condensation in their home, with over a fifth saying their homes had a problem with mould. The issue is exacerbated in the winter months because relative humidity inside the home is higher.

Everyday activities, such as bathing, washing clothes and people breathing generates moisture. It is a common misconception that turning up the heating will prevent condensation – the only way of tackling condensation is by introducing adequate ventilation. 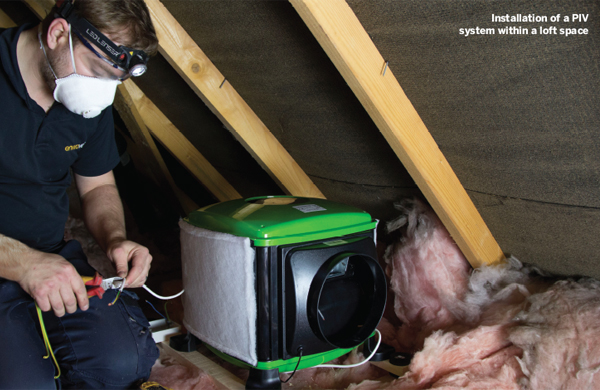 Without a continuous flow of fresh air into and out of a dwelling to control the relative humidity, the internal atmosphere may reach a high relative humidity of around 70-80%, which then leads to condensation. The water droplets that form on colder surfaces can result in mould growth and, in some cases, damage to the building fabric.

Many social housing providers are looking for permanent solutions to the issue of poor ventilation. Weary of mould treatments that don’t work and with pressure from increasingly frustrated tenants, they are looking for longer term, effective solutions.

One social housing provider which has taken direct action is Your Homes Newcastle (YHN), the ALMO (Arms Length Management Company) of Newcastle City Council. Your Homes invested in a Positive Input Ventilation (PIV) system for 150 properties in the last 12 months as a way of reducing mould and damp in its tenants’ homes.

Around 30% of Your Homes Newcastle’s 26,000 properties were built in the 1920s and 1930s and have a brick cavity wall construction with no insulation and single glazing.

Between 2008 and 2014, many of the homes were upgraded with new doors and windows, cavity wall and top-up loft insulation. Although this has made the homes more energy efficient, it has resulted in inadequate ventilation and poor indoor air quality (IAQ), leading to issues with the properties experiencing condensation and mould growth.

As a result of the PIV systems being fitted, Your Homes saw a significant reduction in the number of call-outs to deal with issues with mould growth.

This includes some of the worst affected properties reporting no further mould problems.

PIV systems work by drawing fresh, filtered, clean air from the outside and gently ventilating the home from a central position, usually in the loft, above a landing in a house, or a central hallway in a flat or bungalow. A PIV system works by diluting moisture laden air trapped inside the home and replacing it to control humidity levels between 45 and 60%.

Many social housing providers are therefore recognising the benefits of retrofitting Positive Input Ventilation (PIV) systems into homes that are most at risk of issues with condensation and mould. Fit-and-forget systems, like PIV, are helping to improve the indoor air quality for tenants, reducing the risk of mould and damage to the fabric of a building.

Given that the onus is still on social housing providers to upgrade the airtightness of their homes, there is a very real need for ventilation to be given equal consideration. It is becoming increasingly clear that adding effective ventilation goes hand-in-hand with carrying out energy efficient upgrades.

By upgrading the ventilation systems too, it means that, for a relatively small investment, the level of complaints for issues of condensation and mould growth would be much reduced. Failure to provide adequate ventilation can lead to serious consequences for the health of buildings and their occupants.