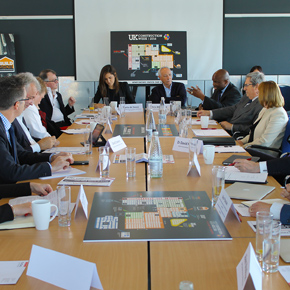 Construction industry must change its mindset to overcome issues

The construction industry must adopt a “factory mentality” to overcome many of the challenges it now faces, according to a recent cross-industry advisory panel hosted by UK Construction Week.

The recent panel event, chaired by property developer and Built by Her campaigner, Marta de Sousa, sought to address the key issues facing the industry today including the skills shortage, diversity, the housing criss and the reputation of the construction industry.

The debate began by asking the panel how the industry was going to attract the estimated 36,000 new workers it needs per year, to meet current demands.

David Cowans, group chief executive of Places for People, cited Shortermism as a major barrier as a result of the industry being so exposed to economic pressures. A boom-bust cycle sees construction workers the first to be affected in a recession, whilst a growing number of projects have been put on hold the the industry awaits the outcome of the EU referendum.

Fragmentation of the industry

Christine Towny, Executive Director of Construction Youth, pointed to fragmentation as a growing problem, with compartmentalisation a real barrier to the effective delivery of projects and the complexities sometimes baffling to end clients.

David Hancock, head of construction at the Cabinet Office, identified off-site manufacturing as a possible to solution to many of the industry’s issues.

This belief was shared by L&G Homes CEO Tom Ground, who believed that computer-controlled factory environments would also improve diversity in the workplace by eliminating the need for heavy-lifting. Diana Montgomery of the Construction Products Association agreed, highlighting that there is no skills shortage in the manufacturing industry and the sector benefits from a much more diverse workforce.

Nathan Garnett, Event Director for UK Construction Week, commented on the discussions: “Against a backdrop of some seemingly major issues, the feeling was one of optimism, with a general consensus that the time has never been better to drive innovation and change mindsets across the industry.

And I very much feel that UK Construction Week has a role to play in this.  By bringing together leading thinkers and innovators under one roof, we are creating the ideal opportunity to promote all that is great about the industry, showcase the UK as leaders in the construction industry, drive change and to attract new talent. UK Construction Week can be a unifying voice. Today’s discussions will feed into our plans, enabling us to create a platform that can be leveraged by the industry as a whole to promote itself and its wider societal contribution.”