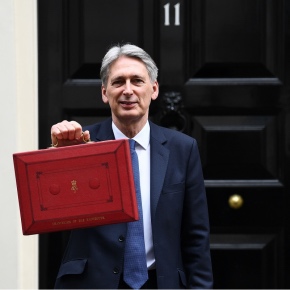 Chancellor Philip Hammond has delivered his first – and final – spring budget which, in his words, reflects ‘an economy that has continued to confound the commentators with robust growth’.

The spring budget did not contain any major announcements for infrastructure or the construction industry, but did emphasise a greater focus on developing technical skills with the introduction of T-Levels.

The T-Level system will overhaul how technical education is is taught by increasing the number of hours students train by 50 per cent to an average 900 hours per year. The system will replace the current 13,000 qualifications with 15, and will be paid for through an extra £500m a year of extra funding.

The 15 courses will include catering and hospitality, engineering, manufacturing and construction amongst others.

During his budget announcement, Philip Hammond commented: “We commit to this programme because we understand choice is the key to excellence in education.”

Industry reaction was largely positive and is seen as an important step in boosting productivity in the future.

Brian Berry, chief executive of the Federation of Master Builders (FMB): “The Chancellor clearly understands that the UK won’t address the productivity challenge unless we rethink our approach to technical and vocational education.

T-Levels could be the answer if they genuinely rival A-Levels in the eyes of parents, teachers and young people. UK society as a whole has been guilty of putting too much emphasis on the academic route – this has made it more difficult for vital sectors like construction and house building to attract the talented people we need.

In construction, we are suffering from a severe skills shortage and this is likely to worsen once we leave the EU and no longer have easy access to European labour. This £500 million funding announced today for T-Levels is therefore a welcome and much-needed boost.

Today’s Budget was an all-round strong performance from the Chancellor and he had good news to report right across the piece. However, increasing tax on the self-employed is not helpful. If we want to establish a resilient, Brexit-proof economy, we must encourage and support our current and future entrepreneurs in the construction industry and beyond.

A jump in National Insurance Contributions from 1% to 10% next year could send the wrong message to those individuals who are considering going it alone. The self-employed are the backbone of our economy and the Government should tread carefully here.”