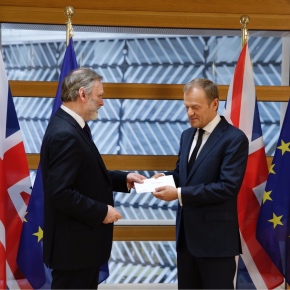 The construction industry has reacted to news that UK Prime Minister Theresa May has triggered Article 50, starting the two year process that will remove Britain from the European Union.

Described as a “historic moment from which there can be no turning back”, the Article 50 letter means that the UK will officially leave the EU some time before March 30th 2019. European Council President Donald Tusk confirmed receipt of the letter, tweeting the following:

After nine months the UK has delivered. #Brexit

The UK is expected to begin negotiations with the EU’s 27 member states in mid-May concerning trade, immigration and security, in addition to an interim arrangement which may last up to three years before the final arrangements come into force.

Other issues likely to be discussed include the Northern Ireland border, sovereignty, the European Arrest Warrant and cross-border security arrangements.

Commenting in Parliament, the Prime Minister said: “I want the United Kingdom to emerge from this period of change stronger, more united, and more outward-looking than ever. I want us to be a secure, prosperous, tolerance country, a magnet for international talent – a country that reaches beyond the borders of Europe, too.”

“Now that Article 50 has been triggered, industry still faces a minimum of two years of continued uncertainty, particularly around issues such as labour availability and construction material costs. Focus must remain on progressing the UK’s ambitious infrastructure pipeline to give confidence to the market in the intervening period.

The delivery of large-scale domestic schemes such as HS2, Crossrail 2, a third runway at Heathrow and the Northern Powerhouse programme are critical to the country’s ability to compete on a global stage.”

Emphasising the need to secure access to skilled workers, he continued: “AECOM employs a large number of international citizens across its UK operations. Safeguarding the rights of EU nationals already in the UK to remain here is important for the wellbeing of our employees, the future success of AECOM and the prosperity of the wider built environment sector.”

The Builders Merchants’ Federation (BMF) focused on the need for a mutually-beneficial customs agreement based on zero or low tariffs.

The organisation commented that leaving the Customs Union without a comprehensive free trade agreement may unsettle planned investments and confidence, with severe repercussions for the building materials supply chain.

BMF managing director John Newcomb commented: “Builders merchants already face significant material price rises due to currency fluctuations and worry that proper consideration is not being given to other obstacles that hamper trade.”