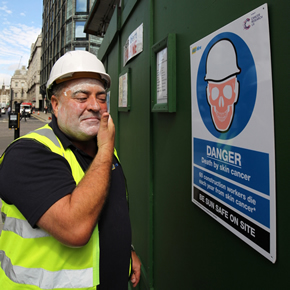 HSS Hire is encouraging construction workers to protect themselves against the summer heat by providing free sun screen at the new Bloomberg site in Central London. Backed by Cancer Research UK, its poster campaign aims to promote sun safety on site.

Developed in conjunction with Sir Robert McAlpine, who owns the Bloomberg site, the campaign targets construction workers. When it comes to skin cancer diagnosis, health authorities have identified them as an ‘at risk’ group: research has revealed that 55% of skin cancer patients work within the construction industry.

As working outside for prolonged periods of time exposes your skin to the sun’s dangerous rays, it is important take necessary precautions, such as applying sun screen on a regular basis.

HSS’ campaign has been developed to remind construction workers of the consequences too much sun exposure can have. 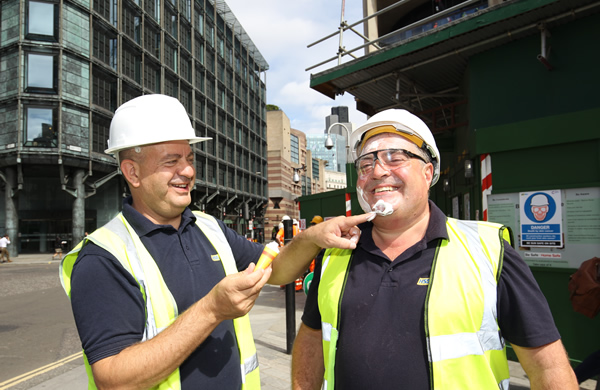 The campaign’s posters, which are sun reactive, feature a colourless face beneath a hard hat. When subjected to 15 seconds of direct, ultraviolet light, the graphic morphs into a skull in a shock of vibrant colour. Photochromic inks were used to create the effect; the campaign is the first of its kind to utilise this particular technology in poster format.

The posters have been mounted around the Bloomberg development, a construction site on Queen Victoria Street, which spans 1,000,000 square feet and employs 1,200 Trade Contractor employees. At the HSS Onsite store, free sun screen is also available to all construction workers.

If the campaign proves successful, it could be rolled out across all HSS Onsite facilities to increase awareness on a national scale.

“Sun safety awareness is hugely important in helping to prevent skin cancer,” comments Ruth Blackwell from Cancer Research UK. “It’s fantastic to see HSS Hire and Sir Robert McAlpine working together for such an important cause.”