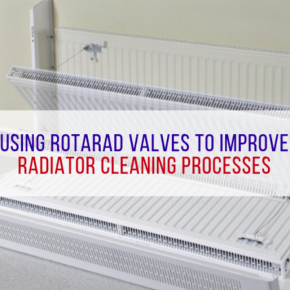 To maintain hygiene levels within the education, healthcare and commercial sectors, Contour Heating has partnered with Rotarad to make its radiators easier to clean and maintain.

LST radiators work by pulling in cold air. As it does this, dust and particles are also pulled in from the floor, pushed up to the roof, heated up and pushed out. When it reaches the highest point in the room the air cools down and spreads out, taking the particles with it.

The air currents that are created by convector radiators aid this process of movement and the closer you are to the radiator the more likely you are to be exposed to the particles. As the air moves around they can easily be inhaled and the smaller the particle the more harmful they can be.

This is particularly prevalent in the autumn, where the dust that’s been allowed to build up over the summer while the heating system was out of use is then warmed up and pushed into the surrounding space.

Research has shown that there is a sharp increase in hospital admissions, particularly of children, in September due to asthma related illness. This correlates with the fact that this is when children begin to spend more time indoors when they return to schools and heating is switched on for the first time.

Busy areas like schools and hospitals naturally generate more dust because of the volume of people moving around in them. This is why it’s important to ensure that cleanliness in these spaces is up to the highest standard to eliminate dust wherever possible. Cleaning is the most effective way to eliminate dust and the risks that it poses from a space.

NHS guidelines require radiator covers to be removed for cleaning and every radiator and cover must be cleaned at least once every week, including the summer.

Being economical with the time it takes while meeting these standards is a challenge often faced by these spaces. A traditional LST radiator can take two people up to thirty minutes to clean. This is where Rotarad valves come in. Rotarad valves allow the radiators to be lowered down away from the wall, making the back of them more accessible. Dust can be cleaned from the radiator itself and the wall which prevents long term build up which poses a health risk.

– Can be used in new and retrofit applications
– Flame-free installation
– Simple and fast to fit and operate
– Reliable, safe and economic to utilise
– WRAS approved
– WRAS, KTW, ACS approved ‘O’ ring
– A design life of 50 years minimum
– Can be rotated through 360 degrees
– Slimline, unobtrusive and paintable

Contour has been using Rotarad valves as part of its LST radiator and anti-ligature radiator ranges for over four years.

There are cost-effective benefits of installing Rotarad into radiators as they allow Contour radiators to be cleaned by one person in just ten minutes. This means spaces can be turned around faster, freeing up staff for other tasks. For financially conscious environments this reduces costs and means money can be invested into other areas such as equipment and staff.