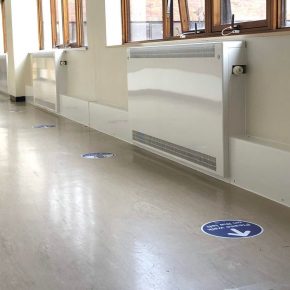 When you have an involvement in the design of a setting that requires safe heating, you will have to make a number of crucial decisions surrounding the type of heating you specify, as Contour explains here…

Quite often, this will boil down to whether you opt for underfloor heating or a low surface temperature (LST) radiator. And whilst the visual differences are clear to see, there are other, less obvious, differences to consider.

Here, Contour discusses the differences between low surface temperature radiators and underfloor heating, exploring the pros and cons of both and discussing the places to best install them.

When to Use LST Radiators & Underfloor Heating?

When it comes to heating installations, it’s usually one of two options. It’s either a refurbishment to an existing establishment or it’s an entirely new build where everything has to be planned from scratch.

This usually dictates the heating solution to use, especially when comparing LST radiators with underfloor heating.

If you’re starting from scratch with a new build, underfloor heating is a fantastic solution that can be installed without any issues. Because there’s no need to dig up the floor, the intricate pipework necessary is installable before the flooring is put in place.

If you compare this approach to fitting underfloor heating into an existing setting, it becomes a much larger job. The floor has to be dug up, the piping needs inserting and the entire heating system may require an update.

With this in mind it’s critical to consider the big picture when making the decision on underfloor heating and LST radiators.

In some instances, you have to picture the long-term plan when considering you’re heating solution. Especially in environments where room layouts regular change such as in hospitals and schools.

If when it comes to changing a room, contractors need to move and replace walls, underfloor heating could very quickly cause some issues.

If without realising, someone drills into the floor where underfloor heating is placed, the slightest amount of damage could render the entire system useless. That could become very expensive, very quickly.

It’d far simpler to have wall mounted low surface temperature radiators that can be moved around and easily fixed to new walls.

Choosing your heating solution is more than just about the benefits of the system itself, it’s also about where the heating system is being used and how this environment changes.

This next section delves deeper into the benefits and disadvantages of both heating solutions.

Heating efficiency is one of the most important factors in deciding between underfloor and LST radiators, and by comparison underfloor heating is a much more energy efficient solution.

Despite this though, compared like for like, it can take much longer for underfloor heating to come up to temperature, which might not be sufficient in some environments with vulnerable residents.

If budgets are an issue for your heating solution, underfloor is perhaps not the best option either. Although it is far more aesthetically pleasing, in comparison with the price of a couple of low surface temperature radiators, it’s much more expensive, requiring much more work.

Despite this, underfloor heating is much more space efficient and means that the floor space of corridors and rooms can be fully optimised without having to consider wall space.

Like the above, LST radiators have their advantages and disadvantages.

Firstly, is cost compared like for like with underfloor heating there is no competition. Low surface temperature radiators units are far more cost effective and are far easier to install and retrofit.

They are also far more robust than underfloor heating. In environments such as hospitals or schools where they are likely to undergo knocks and bumps, these radiators can easily withstand them, being simply replaced in the worst scenarios with little effort.

However, they do take up a significant portion of space, particularly in environments with narrow corridors and small rooms, becoming something of an ‘eye sore’, especially when compared with the sleek and ‘invisible’ design of underfloor heating.

As we’ve discussed, there’s vast differences between low surface temperature radiators and underfloor heating depending on the type of solution you require and where you are specifying for.

If cost isn’t a concern and you’re worried about affecting the aesthetics of your environment, under floor heating might be the right heating solution.

Likewise, if you require something more durable and that can be bespoke designed to suit your particular needs, low surface temperature radiators are going to be the right choice.

If you’re still stuck on the best and safest heating solutions, whatever project you’re specifying for, then talk with one of our team today.