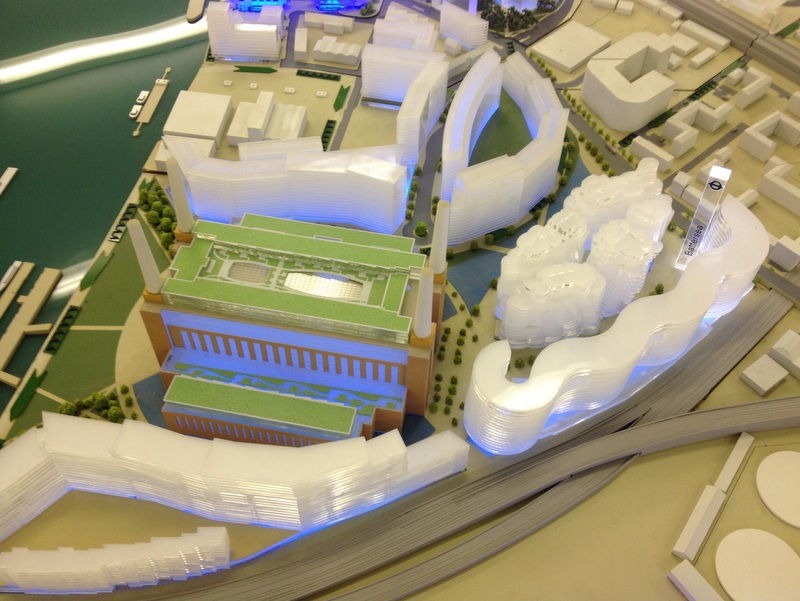 Nine Elms on the South Bank

Nine Elms on the South Bank

Nine Elms on the South Bank spans an area four times the size of Canary Wharf and includes 482 acres (195 hectares) of central London by the River Thames with up to 3km of the riverside being opened up to the public, creating a brand new stretch of Londons South Bank.

Nine Elms on the South Bank will become home to another 30,000 people with a new centre for arts and culture in London plus an internationally significant business district. It will provide 18,000 new homes, 25,000 new jobs, new schools, parks, and high profile visitor attractions.

New American Embassy at Nine Elms on the South Bank

More than £1billion is being spent on new infrastructure including two new Tube stations and the creation of a new linear park sweeping right through the district from east to west.

Nine Elms is already well served by Tube and rail links at Vauxhall but the new Northern line extension will cut travel times to the City. A stones throw from Clapham Junction, the areas connectivity will be further strengthened should the Government advance plans for a new direct rail connection to Heathrow or Crossrail 2, the proposed route for which would run through Clapham Junction.

Vauxhall is being dramatically remodelled to create an attractive and pedestrian friendly environment with new and improved public spaces and better links to the river. A dynamic cluster of tall buildings will also take shape here.

Nine Elms will be home to the new US Embassy, designed by Kieran Timberlake, will open in 2017. It is a already a design classic, providing a safe and energy efficient embassy situated on a 4.9 acre site. Nearby, New Covent Garden Market will be redeveloped and a new

New Covent Garden Market re-development will create a Garden Heart that will provide a new commercial centre for flowers and fruit & vegetables, with a public market, restaurants and business services.

Battersea Power Station has dominated the landscape for almost a hundred years. After 30 years lying dormant, the site is now redeveloping at pace. The former power station will become a beating heart for the area and a new must-visit destination in London. A spectacular new town centre is being created, with new homes, office and retail space as well as 22 acres of public realm, including a riverside park. Architectural visionaries Gehry Partners and Foster + Partners are teaming up to create its High Street.

Boris Johnson said that Nine Elms will be quite possibly the most important regeneration story in London and in the UK over the next 20 years. Its one of the most exciting things happening in this city.

Brochure on Nine Elms on the South Bank

To find out more, download the Nine Elms on the South Bank brochure: Countdown to Central Londons Newest District.

One comment on “Countdown to delivering central London’s newest district”