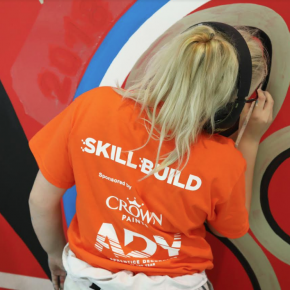 Eight aspiring apprentice decorators will go head-to-head in the final of this year’s national Crown Paints Apprentice Decorator of the Year competition.

The annual competition, now in its 39th year, is organised by the Construction Industry Training Board (CITB) and sponsored by Crown Paints along with other industry leaders such as British Gypsum.

The final is held as part of the SkillBuild event, organised by CITB as part of WorldSkills UK LIVE, at Birmingham’s NEC from 15 – 17 November.

Hundreds of apprentices currently enrolled on painting and decorating courses competed this year, looking to hone their skills and set themselves apart from their peers, as they take the first step on the ladder of their decorating careers.

The competitors first took part in a day-long decorating challenge at one of 12 regional heats this summer, where their work was scrutinised by the competition’s experienced judging panel.

Entrants were scored on a range of criteria, including attention to detail, accuracy and finesse as well as the ability to maintain a tidy working area.

The eight top-scoring apprentices overall earned themselves a place in the final and the chance to be crowned Crown Paints Apprentice Decorator of the Year 2018.

During the final, each apprentice will be given 18 hours in total over the three days to complete a new challenge, again under the watchful eye of the competition’s panel of judges, including Kevin O’Donnell, Crown Paints’ training manager and Ben Deer, a former Crown Paints Apprentice Decorator of the Year.

This year the finalists will be tasked with creating a scaled-up version of an intricate design devised specifically for the final by Crown Paint’s in-house design studio.

Ben Deer, assistant judge and former Crown Paints Apprentice Decorator of the Year winner, commented: “The calibre of entrants this year was extremely high so all our finalists have done exceptionally well to make it down to the last eight – they should all be very proud of what they’ve achieved so far.

“I’d advise this year’s finalists to stay focused on the competition – there’s loads going on throughout the day so it’s easy to get distracted if you’re not completely focussed on the task in hand.

In addition to the national Crown Paints Apprentice Decorator of the Year competition, any age-eligible finalist could have the opportunity to represent the UK in the WorldSkills competition being held in Shanghai in 2021.

Held every two years, WorldSkills attracts young professionals from all corners of the globe for the chance to win a prestigious medal in their chosen skill.