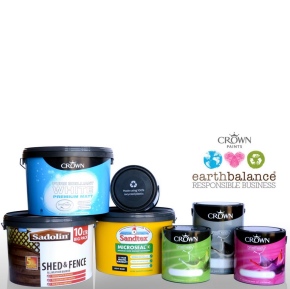 Crown Paints is celebrating ten years of its highly successful earthbalance sustainability scheme, which aims to limit its impact on the environment.

Crown’s earthbalance scheme touches on all aspects of Crown’s business from manufacturing to packaging and applies to all staff and operations at Crown’s two UK manufacturing plants as well as its network of more than 150 Crown Decorating Centres in the UK.

Since the creation of earthbalance 10 years ago, Crown has managed to reduce its overall electricity consumption by 15 per cent, reduced packaging waste by approximately 15 per cent, recycled more than 800 tonnes of paint cans and donated 112 benches made using recycled paint cans through social enterprise NIMTECH.

In addition, its popular ‘Can Back’ service, which is run through its network of Crown Decorating Centres in partnership with NIMTECH has seen thousands of empty cans recycled rather than being thrown away.

The scheme has also enabled Crown to reduce the amount of waste going to landfill with 65 per cent of waste being reused or recycled in some way, including 39,000 litres of paint, benefitting a number of deserving community projects through its ‘Kick out the Can’ initiative.

Crown is a member of the global Hempel Group, making it committed to working towards reducing CO2 by 12 per cent in the next two years – a target it is on track to achieve.

As part of the earthbalance scheme, Crown holds Environmental Product Declarations (EPDs) through BRE on its most popular products, demonstrating their compliance with the European Standard EN 15804.

Philip Cefai, managing director at Crown Paints comments: “We’re very proud of the earthbalance scheme and everything it’s helped us achieve over the last 10 years. We’ve worked hard to ensure staff from across the whole business are on board and engaged with the scheme and as a result earthbalance is now a central part of the culture at Crown Paints.

“Over the years the scheme has been recognised for numerous national awards and we believe it’s made a real difference to our environmental credentials as a company. We’re constantly looking for new ways to improve and the earthbalance scheme will remain a key part of our company ethos as we go forward into the next decade.”