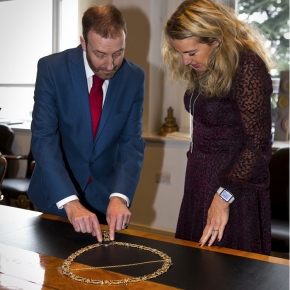 The Painting and Decorating Association has gifted Crown Paints with a piece of industry history.

Neil Ogilvie, the association’s chief executive, presented an intricate chain of office timepiece to Crown Paints’ Lancashire headquarters. Made in 1904 and rich in heritage in the North West, the gold chain belonged to the Manchester and Salford branch of the British Decorators Association, now the Painting and Decorating Association. 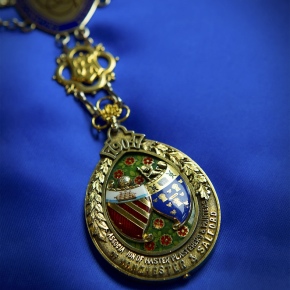 In the early 1990s, the Manchester and Salford branch ceased operations and the chain was then returned to the trade body’s head office. Then in 1992 the PDA moved to new headquarters in Nuneaton and the chain has been in safe storage for more than 20 years until PDA staff recently rediscovered it.

The association has tried to investigate the chain’s background but many contacts for the area can no-longer be reached for further information, claims Neil Ogilvie. 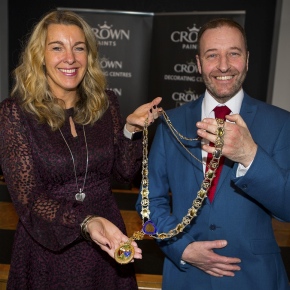 He continues to explain that the association presented the chain to Crown Paints as it represents the area in which they are based and is also a fitting tribute to give this important piece of history to a long-standing supporter.

Crown Paints’ marketing director, Liz Hickson commented “we both have history which stretches back hundreds of years and this presentation was a special opportunity to reflect on that heritage.