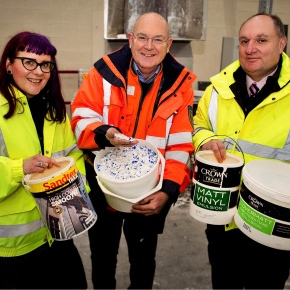 Crown Paints making the most of waste

New types of materials are converted from old paint containers, which can then be reprocessed to make street furniture such as garden benches and planters.

NIMTECH provides Crown with waste recovery and recycling services across the UK, a key part of Crown’s sustainability programme.

The team can prepare all used plastic containers for processing on site with the granulator adding new dimension to Crown’s capabilities with NIMTECH, says Crown Paints’ Sustainability Manager, Mark Lloyd.

The plastic containers are granulated into small pieces, bagged and sent off site for reconstituting into new plastic products, he explains.

The large-scale transport and mileage implications for thousands of containers are removed, as the plastic containers no longer need to be transported off site in bulk to be granulated.

The NIMTECH partnership was originally introduced to its Darwen headquarters in 2012 as part of its award-winning Earthbalance sustainability programme, launched in 2008.

NIMTECH ensures that the maximum amount of waste can be re-used and recycled by working closely with the manufacturing team on site. The partnership was extended to the city’s manufacturing plant in Hull earlier this year.

Earthbalance is focusing on changing the way Crown Paints does business in terms of social responsibility, the environment and the economy.

The initiative has had a meaningful impact in areas including the support of young people/apprenticeships, carbon reduction and the ethical sourcing of materials. Consequently, Lloyds Bank awarded the initiative the Sustainability accolade at the 2015 National Business Awards.

The partnership supports the circular economy – keeping goods in use for as long as possible, and then recovering and regenerating the associated products and materials accordingly – a key element of Earthbalance.