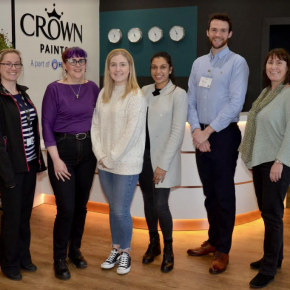 Leading paint manufacturer Crown Paints has chosen Alzheimer’s Society as its new charity partner for the next three years, following a company-wide vote.

Crown asked all of its 1,100 employees to vote for which charity to support as a company, with Alzheimer’s Society, the UK’s leading dementia charity, gaining the most votes in total.

The charity provides invaluable advice and support for people living with dementia, as well as funding research to find a cure and campaigning for change.

The company officially began supporting Alzheimer’s Society on the 1 February, and will host a number of fundraising events throughout the next three years at its head office in Darwen, manufacturing facility in Hull and across its network of 140 UK-wide Crown Decorating Centres.

All monies raised through these activities will be donated to the charity.

Natasha Patel, Alzheimer’s Society’s senior regional corporate partnerships executive, spoke about having the support of Crown Paints for the next three years.

“We would like to say a huge thank you to employees of Crown Paints for choosing Alzheimer’s Society as their charity partner for the next three years,” she said.

“We are really excited about working together in a mutually beneficial partnership and the funds raised will go directly towards supporting people affected by dementia.

“By 2021, one million people will be living with dementia and that’s why the generosity we receive from businesses like Crown Paints will help us to achieve our vision of ensuring everybody who is affected by this awful disease receives the care they need and deserve.”

Fiona Eason, people and culture director at Crown Paints, commented: “We’re delighted to be supporting Alzheimer’s Society as our new charity partner, as voted for by Crown Paints employees.

“It’s a fantastic charity which supports those affected by Alzheimer’s while campaigning for change. We’re excited to organise a number of fundraising events at our offices and throughout the Crown Decorating Centres network in the coming years to show our support as a business for a cause which affects so many people.”