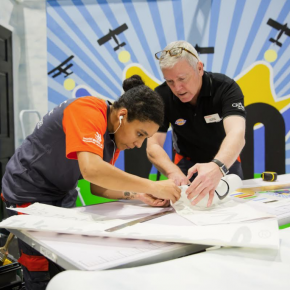 The regional heats of the prestigious Apprentice Decorator of the Year competition, sponsored by Crown Paints, have finished, with eight decorators from nationwide set to take the stage at the national final in November.

Apprentice decorators from Scotland, Wales, the North West, Yorkshire and Humberside, West Midlands, and the South West will go on to compete in the final, which takes place across three days during the WorldSkills UK LIVE event at Birmingham’s NEC.

This year marks the 40th anniversary of Crown Paints’ sponsorship of the competition, which is organised by the Construction Industry Training Board (CITB) and is also sponsored by other industry leaders, such as British Gypsum.

Hundreds of apprentices took part in the regional heats, held at colleges across the country, which saw the competitors’ work scrutinised by the Apprentice Decorator of the Year judges, before being scored on a range of criteria, including attention to detail, accuracy and finesse, as well as the ability to maintain a tidy working area.

The eight highest-scoring contestants earned a place in the final and the chance to be crowned as Apprentice Decorator of the Year 2019.

In the final, the competitors have 18 hours over three days to complete a decorating challenge devised by Crown Paints, closely observed by a judging panel that includes Crown Paints’ training manager Kevin O’Donnell, and Ben Deer, a former Crown Paints Apprentice Decorator of the Year.

Kevin commented: “Once again we have been very impressed by the standard of work displayed during the regional heats, so these eight apprentices should be truly proud of their achievements so far.

“Competing in the final requires them to take another step up in terms of attention to detail, skill and ability to work well under pressure, so any one of them could walk away with the title of Apprentice Decorator of the Year.

“There’s a good mix of people in here, some who have entered with the support of their college, with apprentices from Leeds College of Building, Accrington & Rossendale College, Cardiff and Vale College Barry Campus, and City College Plymouth, as well as those who are working with well-known contractors including Novus, Bell Group, and Ian Williams, so I will be watching each of them closely to determine who performs the best on the day.”

The final is held as part of the SkillBuild event, organised by CITB as part of WorldSkills UK LIVE, at Birmingham’s NEC over three days, from 21 – 23 November.

It is the largest multi-trade competition in the UK for construction trainees and apprentices and covers a range of skills and sectors from bricklaying and cabinet making to plastering and stonemasonry.