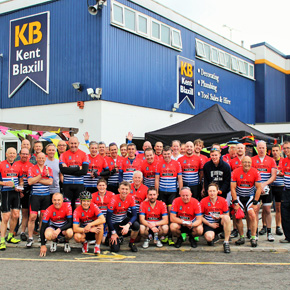 Crown Trade has raised more than £7,000 for the Rob George Foundation and the East Anglian Air Ambulance as part of a 120-mile charity bike ride organised by Kent Blaxill.

Approximately 50 cyclists took part in the charity event, which started and finished at the Kent Blaxill Colchester branch and took in stops across various locations in Essex and Suffolk.

The cyclists included Kent Blaxill employee Andy English, who completed the marathon on a recumbent bicycle, which is rode from a horizontal position.

Cyclists can still be sponsored by visiting the Virgin Money Giving website.

The Essex and Suffolk cycle event is the second charity bike marathon organised by Kent Blaxill. The first ride was held in 2013 to celebrate the company’s 175th anniversary and was also sponsored by Crown Trade.

The Crown team consisted of Marc Lenaghan and Luke Dix, both of Crown Paints, and Andrew Harvard and Mike Turner of Ian Williams.