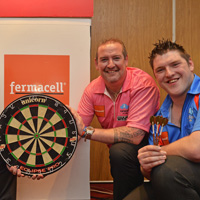 The sponsorship was unveiled during an afternoon event in Birmingham, where over 20 Fermacell customers and employees participated in a darts tournament against professionals, hosted by TV MC Paul booth.

Dean Winstanley and Daryl Gurney will be sponsored by Fermacell for the next 12 months.

The amateurs had to try and match the professionals’ scores with three darts and then compete to throw the highest score.

Darts is currently enjoying a worldwide renaissance. The most recent PDC world championships on Sky TV had more viewers than any other sport (other than football), peaking at 1.2 million viewers for the final.

To coincide with the event, Sky changed its Sky Sports 2 channel to Sky Sports Darts for the whole of last December.

Fermacell general manager Gary Carter commented: Professional darts is a sport that is very relevant to our key market of building trade professionals and we have been searching for the right partnership for some time.

I firmly believe we have come up with a winning formula and look forward to both Dean and Daryl wearing the Fermacell logo in many successful tournaments.

Dean Winstanley, who is ranked 26th in the world, said: To have a massive company like Fermacell backing me makes me proud and determined to break into the top 16 in the world and win my maiden PDC title.

Daryl Gurney added: The first two years in the PDC were very tough but I feel more comfortable in my own skin now and I know I can compete and beat the very best in the world so to have such great backing just gives me more motivation to achieve my goals.