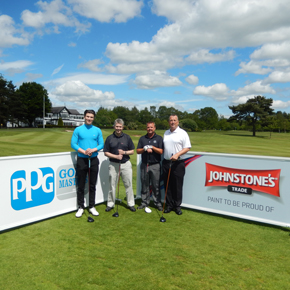 Sixteen decorators will soon compete in the PPG Golf Masters final in Valderrama, Spain this October.

PPG Architectural Coatings, which manufacturers leading paint brands Johnstone’s Trade and Leyland Trade, has run the invitational competition for the past seven years, with over 750 decorators taking part in 2015.

After securing their places through a series of regional heats across the UK, fifteen finalists will be joined by last year’s champion, Geoff Telford, who looks to defend his title.

This year a special Golden Ball competition also ran throughout the regional heat stages, raising more than £5,000 for PPG’s chosen charity partner, When you Wish upon a Star.

All competitors were given the opportunity to donate £10 for a special edition, individually numbered golden golf ball. A specific hole was chosen on each course at which customers would play ‘nearest the pin’ with prizes for the winner.

The PPG Golf Masters final will be held at the 1997 Ryder Cup venue of Valderrama in southern Spain.