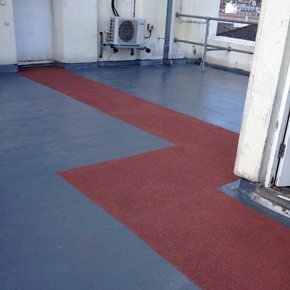 The Grand Hotel in Brighton has benefited from the application of Sika Liquid Plastics’ Decothane Omega 15 system to protect its roof from the elements.

Originally built in 1864, the Grand Hotel made global headlines following an IRA bombing in 1984. The hotel underwent a major refurbishment in 2013 including the addition of a spa.

The latest roofing project is the third undertaken at the hotel by Allweather Roofing & Construction as part of a wider refurbishment scheme by main contractor J. Davies Building.

Allweather Roofing specified the Decothane Omega 15 cold liquid-applied system as the ideal solution for overlaying the existing 130m2 asphalt roof area, which had been leaking in several areas.

The project began by removing the screeded raised walkway on the existing asphalt. The installation team then jet washed the substrate and carried out patch repairs by cutting out areas of the surface that had blistered and replacing the asphalt to create a level surface.

Allweather Roofing carried out the overlay in two phases, moving all the various items of plant to one side of the roof whilst the first section was refurbished to allow the hotel to remain fully operational throughout the development.

The second area of the roof was then completed before all items of plant were reconnected in their original location.

The waterproofing membrane was dressed up in the parapet wall that surrounds the roof area. Allweather Roofing lifted the existing lead flashings and took the Decothane Omega 15 system up the wall and then redressed it, replacing the original lead over the newly waterproofed area as it was in good condition.

A new non-slip walkway was then created on the roof between the fire escapes on each side of the building. The roof’s box gutters were also re-waterproofed using Decothane Omega 15.

Michael Owens, managing director of the Allweather Group, commented: “We have been using Sika Liquid Plastics roofing systems for ten years on various contracts in London and around the South of England. As a Quality Assured Sika installer, we had the confidence to recommend Decothane Omega 15 system as we knew it would provide the ideal membrane for overlaying the roof, with a 15 year guarantee and excellent UV resistance.

The system avoids the need for hot works and strip out, curing to provide a durable, flexible and seamless membrane that will protect the prestigious hotel, its contents and its guests for years to come.”