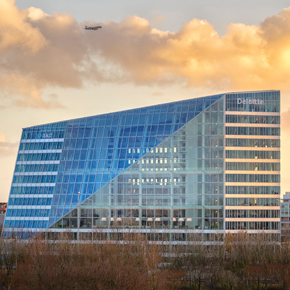 The Edge is a 40,000m office building designed by PLP Architecture for developer OVG Real Estate and main tenant, Deloitte, which is located in the Zuidas business district in Amsterdam.

The ambition of the project was two-fold: to consolidate Deloitte’s employees – previously spread around multiple buildings throughout the city, within a single environment – and to create a smart building, intended as a catalyst for Deloitte’s transition into the digital age. ABC+D takes a closer look… 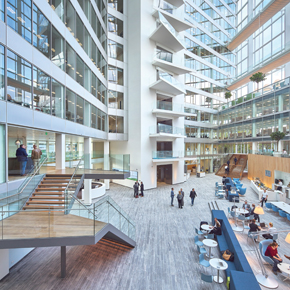 The Edge, also known as a computer with a roof, sets an example of a smart and sustainable office building for the sector.

The Edge creates a radically new working environment which is enabled by sustainable technologies. With the world’s highest rating awarded to an office building by BRE, the global assessor of sustainable buildings, The Edge combines numerous smart technologies in tandem to create an adaptable and intelligent working environment; it demonstrates that the pursuit of a vibrant and collaborative work environment can come together successfully with achieving the highest level of sustainability possible for a building.

BREEAM helped achieve an office building that is not just energy neutral but energy positive. The Edge uses 70% less electricity than comparable office buildings. The roof and the south-facing façade incorporate the largest array of photovoltaic panels of any European office building and an aquifer thermal energy storage system provides all of the energy required for heating and cooling. A heat-pump was applied to the aquifer thermal energy storage system which significantly increases efficiency. These types of cutting-edge developments have ensured that The Edge scores particularly well on innovation credits.

Occupancy, movement, lighting levels, humidity and temperature are continuously measured and, through the application of smart technology, including ethernet-powered LED connected lighting, the building systems respond to maximise efficiency. However, the real outcome of The Edge is not just the reduction in water and energy use of its own users, but the project’s role as a feasible, high quality example of new technologies, new ways of designing, and new ways of working. 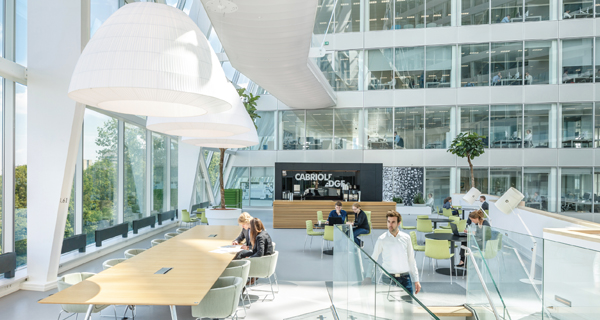 Each façade is uniquely detailed according to its orientation and purpose. Load bearing walls to the south, east and west have smaller openings to provide thermal mass and shading and solid openable panels for ventilation. Louvres on the south façades are designed according to sun angles and provide additional shading for the office spaces, reducing solar heat gain. Solar panels on the south façade provide enough sustainable electricity to power all smartphones, laptops and electric cars.

The north façades are highly transparent and use thicker glass to dampen noise from the motorway. The atrium façade is totally transparent, allowing views out over the dyke and steady north light in, while also acting as a buffer between the workspace and the external environment. Excess ventilated air from the offices is used once again to condition the atrium space.

The building integrates an Ethernet-powered LED lighting system, which combines 30,000 sensors to continuously measure occupancy, movement, lighting levels, humidity and temperature, allowing the building to automatically adjust its energy use.

Two, 129m deep wells reach down to an aquifer, allowing thermal energy differentials to be stored deep underground. Rainwater is collected on the roof and used to flush toilets and to irrigate the green terraces in the atrium and other garden areas surrounding the building.

The Edge, also known as a computer with a roof, sets an example of a smart and sustainable office building for the sector.

Speaking of the new building, Cees van der Spek at The Edge said: “Due to BREEAM’s acknowledgment as the most widely used certification method, and The Edge currently being the world’s most sustainable office building (according to BRE) and most connected office building in the world (according to Bloomberg), developers and international companies such as Sony, BCG, Microsoft and developers visit The Edge to learn from it. More than 10.000 people have visited The Edge in 2015.”

The Edge was assessed under the BREEAM NL New Construction standard operated by the Dutch Green Building Council. For more information visit www.breeam.nl