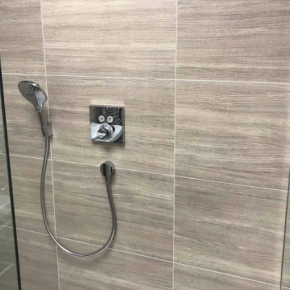 James Hargreaves will now be featuring Fibo’s bathroom wall panels in all of its 23 showrooms, as demand surged after installing them in seven new showrooms.

The independent plumbers’ merchant started selling Fibo products last November and although retro-fitting the established showrooms is set to take time, the good response from customers makes them believe it will be worth it, according to Bill Davies, Sales Director of James Hargreaves.

He said they sell two other panel ranges but it’s Fibo’s premium Mercato range which has created the most demand, thanks largely to the wide choice of colours and finishes and the fact it has a unique ‘grouting’ line which makes the panels look and feel like tiles.

“Unlike tiles, however, the panels are quick and easy to install and much more hygienic as there’s no actual grout to collect dirt and mould,” he said.

He also praised them being more cost-effective, with makes savings on labour as specialist tilers are not required to fit them.

Established in 1968 in Burnley, James Hargreaves has emerged as one of the quickest-growing bathroom and plumbing merchants in the North.

Bill heaped praise on Fibo, who he says have helped them grow: “Fibo is very proactive and generous with its support; the displays, POS material, swatches and sample panels are good quality and supplied free of charge, and they’ve given us contract work and directed installers to us.”