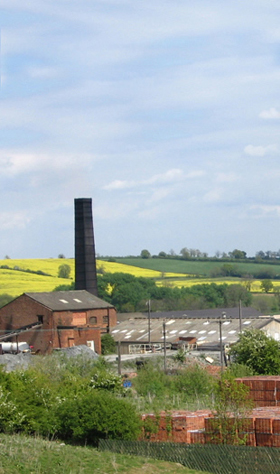 Blockley in Gloucestershire, the home of the Northcot Brick, one of the UK’s last remaining independent brick manufacturers, originally established by the Spencer-Churchill family in 1925.

Northcot still takes clay from the same quarry used over the centuries. The outstanding blue lias clay consists of a sequence of limestone and shale layers, laid down in early Jurassic times around 195 million years ago. It still yields up fossils from that period, especially ammonites.

The separated clay, when fired in Northcot’s traditional coal-fired kilns, produces an intense base colour that results in an exciting range of naturally-coloured quality bricks with an enduring finish.

Master brickmakers at Northcot combines the best of old-style character’ bricks and kiln-firing craft with a modern bespoke service that is increasingly in demand by architects and designers.

The bricks were used throughout the UK including in the construction of the original Battersea power station designed by Sir Giles Gilbert Scott, famous for his design of the red telephone box. This iconic power station, on the south bank of the river Thames in London, is now forming part of a major urban regeneration project.

Whilst Northcot is steeped in the rich traditions of brickmaking, it is also a modern family-owned company that has brought the latest technology to bear on its production techniques. It observes the latest environmental standards and has been awarded ISO 14001 certification. Northcot Brick has also been awarded membership of the Guild of Master Craftsmen in recognition of its skill and excellence in traditional brickmaking.

Traditionally made, reclaimed and specialist bricks

Today, Northcot is a thriving modern business, employing around 50 people and using computer technology to supply a comprehensive range of traditionally made, reclaim and specialist bricks to a network of stockists. The bricks they make are used in all types of building projects all over the country.

Customer support services include brick quantity advice and 48 hour sample dispatch. Above all Northcot is continually investing in new machinery and with the most recent addition is now able to add to the one-piece ‘specials’ range.