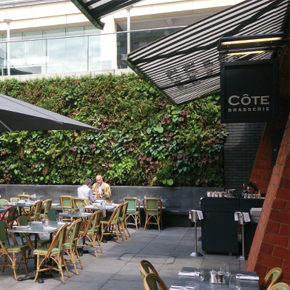 Design buildings with more greenery to boost health and wellbeing

In today’s world, where we spend 90% of our time indoors, the way we design buildings must create spaces that are still healthy for its occupants. This is supported by the biophilia hypothesis which outlines the need for humans to have contact with nature for a productive, relaxed and healthy environment – whether at work, home or in a public setting.

In this month’s ABC+D Magazine, Steve McIntyre, at ANS Global, considers this theory and how those involved with the building design process can bring the outside in…

There has been extensive research into the health benefits of living walls and green walls, which concludes that simply being around greenery has a calming effect. This, known as the biophilia hypothesis, suggests humans are “powerfully responsive to nature’s forms, processes and patterns.”

Advocates of the biophilia hypothesis suggest that one of the reasons we could feel such a strong connection to plants is evolutionary. Recognising a plant’s shade of green was really important to identify it as food, shelter or medicine – perhaps this is the reason we feel so comfortable around them.

Some studies have also concluded that moving to a green space had a sustained positive effect on occupant wellbeing – unlike pay rises or promotions, which only provide a short-term boost. 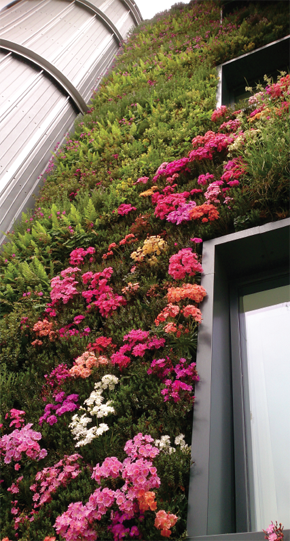 F. L. Olmsted, an American landscape architect, theorised in 1865 that “natural views foster restoration from mental fatigue.” His argument was that natural settings restore our minds, because they are pleasurable to look at and they hold our attention without mental effort. More recently, a group of academics put this theory to the test.

In 2015, a study compared the effects of two different views at 40-second intervals. One group completed tasks after viewing a flowering meadow green roof and the other group had simply a bare concrete roof. The first group made significantly fewer errors and responded more consistently to the task at hand.

However, there are physical health benefits that nature provides, too. Being able to understand these is growing in importance, with our homes and offices continuing to suffer from poor indoor air quality. The cause is often indoor pollutants such as germs, bacteria and viruses or certain types of furniture containing hidden, potentially harmful chemicals.

The World Health Organisation estimates that up to 30% of new and remodelled buildings worldwide could suffer from poor indoor air quality.

When you consider the fact that we spend 90% of our time indoors, in more serious cases, a person might develop asthma or even cancer or heart disease. This phenomenon is known as Toxic Home Syndrome or Sick Building Syndrome, which is when a person’s health deteriorates as a result of poor air quality in their home or a building they spend a lot of time in.

In response to this, the markets for living walls and green roofs have both seen growth, especially in urban areas where green space is often lost to intensified development. This is because they are made up of plants that can help absorb pollutants from the air such as carbon dioxide and replace it with oxygen.

ANS Global offers many options to architects and specifiers; whether it is a green roof or a living wall, there are ways to design them to increase health benefits even further. For example, growing fruit and vegetables on a green roof or incorporating a herb garden in a living wall supports a balanced diet as well as cleaner air and wellbeing. The plants and species can be planted in a way to create patterns, logos or pictures so each is unique to the client.

Studies focusing on the link between acoustics and health have also concluded improving acoustics can lower blood pressure and reduce stress levels. This is also something that living walls and green roofs support, because plants reflect and absorb acoustic energy. Therefore, by incorporating more greenery into a building’s design, city noise and reverberation can be reduced, ensuring offices are calmer workspaces and homes allow their occupants a restful sleep.

Now that our society understands more about mental health, air pollution and acoustics, we need to design buildings that reflect this. A great way to support this is to incorporate more greenery, whether internally or externally. This supports the health of its occupants but also has environmental benefits, for example, green roofs reduce stormwater runoff by storing rainwater in the drainage, substrate and plants and, like living walls, moderate temperature.