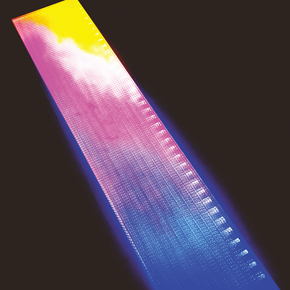 A new lighting collection featuring Dichroic Film from 3M has been unveiled at the Surface Design Show.

The Dichroic Film was demonstrated on the Lumiscopic stand. It was used to create dramatic and eye-catching light responsive surfaces which change colour dependent on the viewing angle. 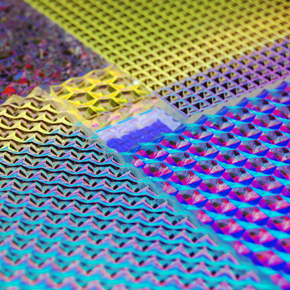 3M’s Dichroic Films can be applied to glass, plastic or acrylic surfaces as a visual opaque or decorative graphic. The colours displayed are influenced by the environment, lighting, viewing angle and surface colour.

Lumiscopic designer and owner Lisa Alcock commented on the application of the product. She said:

“I have been working with Dichroic Film from 3M for a few years now and it has inspired me to create amazing effects with my artwork that might not have otherwise been possible. The aim of my exclusive collection is to produce a wow effect – stopping passers-by in their tracks, and generating an energising and uplifting ambience.”

“I am continually finding new and innovative ways to utilise the films in our projects which include a variety of surfaces from feature wall panels, large-scale lighting panels, worktops and shelving to furniture. The wonderful light and colour effects the films produce are truly amazing and if the design needs to be changed, the films can be easily removed without any damage to the original surface.”

The Surface Design Show took place between the 9-11th February 2016, providing an opportunity for architects and designers to source new and innovative materials for their projects.