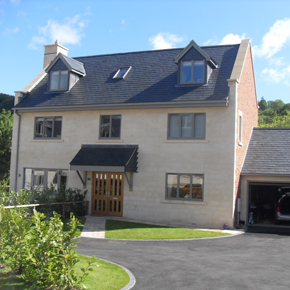 An exclusive housing project in Nailsworth, Gloucestershire has specified around 18,000 of SSQ’s Domiz, Welsh blue-grey slates.

Comprising one six-bedroom and four five-bedroom newly built stone houses, the project was in need of an affordable roofing slate that would fit in aesthetically with the smooth Ashlar facing stone to the front and the rustic brick in the rear.

Cedar House Construction chose SSQ’s Domiz slates for the project, as they matched the desired look and were suitable in terms of cost and availability.

The slates themselves were nailed into place to help achieve a sleek finish.

The completed project was praised by homeowners, who were particularly impressed by the bold texture and blue-grey overtones which complemented the appearance of the exterior façade.

Head of Marketing at SSQ, Haroun El-Helw, said: “We take great pride in our Domiz slate. It offers the appearance and long-term performance of a Welsh blue-grey slate, at a fraction of the price.”

Covered by a 50-year guarantee, SSQ Domiz is tested in accordance with EN 12326 and carries CE marketing.

Its natural rich, blue-grey colour has been developed not to fade – even under the strongest sunlight or harshest of environments – regardless of the grade selected.