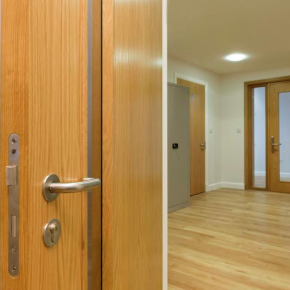 Doorsets and ironmongery supplied by Allgood

Previously installed in similar facilities, the Allgood ironmongery has valuable feedback from the client on sustainability both in terms of durability and design.

Steve Clayton, experienced Allgood Sales Representative, assisted the project and provided technical advice and guidance on the ironmongery products most suited to the project brief, and highlighted the additional capability of Allgood to supply internal doorsets.

Allgood was appointed by project contractor City Building (Glasgow) LLP, for both elements without substitution.

Any queries can be answered swiftly due to the one point of contact for the complete ironmongery and door package, and the delivery of door sets and ironmongery to be successfully co-ordinated and delivered on time. Door compatibility for the desired ironmongery was achieved by co-ordinating purchases. 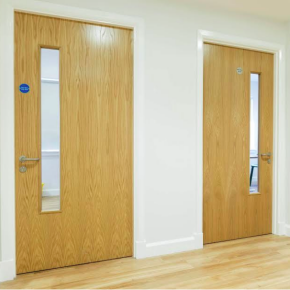 Allgood Alite ironmongery was incorporated within the doorsets. Alite is a robust range, developed with local government projects in mind to provide a durable commercial product at a cost effective price. Installed throughout the communal residence were Alite lever handles, WC signs, fire door signs along with door signage and spy holes.

Allgood’s Sales Representative, Steve Clayton said that the procurement and delivery process was streamlined by utilising both Allgood ironmongery and doorsets and installation time onsite was also reduced.

Additionally, all morticing for both doors and ironmongery was completed in the factory, prior to delivery, to further reduce fitting time and limit any onsite disruption.

He also added that the close proximity of the Allgood factory added benefit for this project in particular, which aided the successful, timely delivery of all components. Therefore, Allgood could work extremely closely with the site contractors to ensure deliveries were made in the number of phases required.

Glasgow City Council, Glasgow Health and Social Care Local Partnership opted for fully concealed door closers. The closing mechanism is fully concealed and invisible to visitors to the building, incorporated within the door and frame.