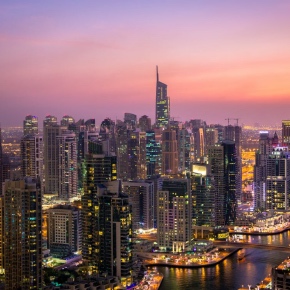 Construction technologies are evolving at a rapid rate. First thought of as an effective way of implementing mass-produced housing and low-rise buildings, 3D printing is now being used to create “architecturally complex skyscrapers at never-before seen speeds”.

The company that is making this a reality is Cazza, a Dubai-based construction firm that will utilise a new technique called “crane printing” to building the world’s first 3D-printed skyscraper.

Speaking to Construction Week Online, Cazza CEO Chris Kelsey commented on the project:  “Developers kept asking us if it was possible to build a 3D printed skyscraper. This led us to begin researching how we could adapt the technologies for taller structures.

Through our technologies, we will be able to build architecturally complex buildings at never-before seen speeds. It is all about economies of scale where the initial high technology costs will reduce as we enter the mass-production phase.”

Whilst no details about the building’s planned height or commencement date have been unveiled, it has been confirmed that the structure will be manufactured primarily from concrete and steel printed by Cazza’s cranes.

The crane printing system uses the company’s existing cranes, with added features that make the system it adaptable to high wind speeds.

A similar system was utilised to create the world’s first on-site 3D printed residence in February. The project was completed by San Francisco-based startup Apis Cor in less than 24 hours. The company used 3D printing technologies to lay down concrete walls on a test site in Russia, which made up a 400 square foot house.

The printer resembles a small crane, which layers a concrete mixture to create the building. The printer is then removed and insulation, windows, appliances and the roof are added.