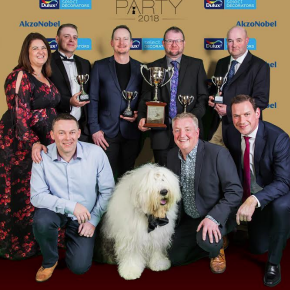 The winners of the Dulux Select Decorator of the Year Awards 2018 have been announced, recognising their efforts to go above and beyond in delivering exceptional workmanship and surpassing customer expectations.

Members of the Dulux Select decorator scheme are able to apply to the competition by submitting a portfolio of their work, including details of their specifications for the project, client feedback and customer service provided.

Aaron Davidson was awarded the £1,999 and below Interior category award for his recent work on a domestic hall, stairs and landing where the walls were in a bad state of repair. Aaron comments: “Winning the Dulux Decorator of the Year award has really helped me to raise my profile even more.”

The $4,000 and below Interior category was won by Anthony Nolan when he redecorated a former 19th century infant school and parish council dwelling which has been a private domestic home since 2004. Having previously won the award in 2017, Anthony was thrilled to win again: “I was so surprised to have won for a consecutive year and will definitely be entering the Dulux Select Decorator of the Year competition in the future.”

Nick Dodge won the Exterior Project category after demonstrating his attention to detail and top customer service to judges with his commitment to both the preparation and finish of the project. Nick comments on the awards: “I really valued the opportunity to see the work of other professionals throughout the award ceremony and stand alongside them as joint winners.”

Finally, Trevor Mangan was awarded both the Interior category for projects priced between £2,000-£3,999 and the Grand Winner prize. Trevor completed work on a home whilst the family were away, with Trevor constantly keeping them up to date on the progress of the project. Trevor couldn’t have ever imagined he’d actually win, explaining: “It’s so rewarding to hear your name be called out and to have all of your efforts recognised and rewarded.”

The Awards were created to support and champion those professionals who continue to develop and improve their industry knowledge and skills. The Dulux Select Decorator scheme encourages the professional, reliable and trustworthy painters and decorators currently working across the UK, who continue to ensure the best standards for their customers.