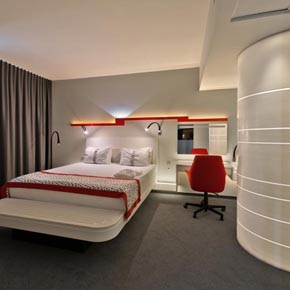 DuPont Corian has been used extensively throughout the newly renovated Holiday Inn in Vilnius, Lithuania to offer a blend of comfort and innovation.

The Holiday Inn hotel is located in the heart of Vilnius, the capital of Lithuania. The city is renowned for its architectural beauty and for its business centre, with its reputation growing year on year as a “can’t miss” European destination.

As part of the buildings renovation, architects Arches specified Dupon Corian for the vertical and horizontal surfaces in the majority of its refurbished rooms. 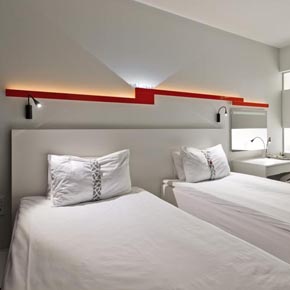 The sliding frame gives the option of a double bed or two singles.

The focus of the project centres on the creative use of light combined with the translucency of the high-tech surface of DuPont Corian. It was also pivotal for the design to seamlessly extend from the bedroom into the bathroom, tying together the various elements of the rooms into a continuous flow.

For this purpose, the architects created a scheme in which Dupont Corian forms a common thread between the bedroom, bathroom and living room areas.

The bedrooms are equipped with a headboard created from Dupont Corian, designed to frame twin beds which look as if they’re suspended in the air. The beds are installed with a sliding mechanism, that allows the beds to be joined together or remain separate as twins.

The base of the bed is also made using DuPont Corian, and is joined seamlessly to the desk beside the bed. 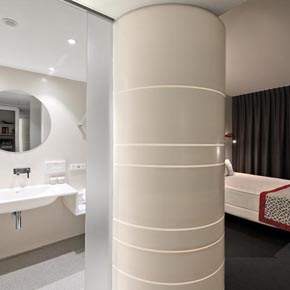 The shower acts as a partition between the bathroom and bedroom areas.

In the living area of the executive suite, DuPont Corian is incorporated in a mini fridge, shelves and wall cladding, which also integrates a television. Each room is equipped with ‘Smart Home’ systems and LED lighting.

The easy-to-clean Dupont Corian also features in the bathroom area, which is characterised by a shower enclosure that acts as a partition between the bathroom and bedroom areas.

The room uses DuPont Corian in two different thicknesses of 6mm and 12mm, specified in an ultra-translucent Glacier Ice shade which filters through the thinner band accents when the shower LED light is turned on.

The vanity and shelves also use the material to lend a harmonious ambience to the overall design concept. 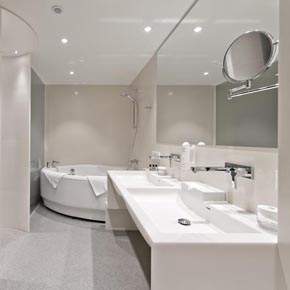 Dupont Corian was specified in a Glacier Ice colour

The sheer quantity of DuPont Corian used, as well as the short time frame of 6 weeks it took to complete the design, were both distinctive features of the renovation process. As the hotel never closed during the project, it was of utmost importance that the intensive work did not disrupt guests.

“When we were commissioned to carry out the refurbishment of the Holiday Inn hotel in Vilnius, we aimed to create interiors that would be both comfortable and rational, because it is particularly a business hotel.  Each room is organised as a single space in which the private environment for the bathroom is established by translucent partitions.

The design is based on a clean, contemporary look and a connected floating furniture system made from what appears to be a single ribbon of DuPont Corian. Thanks to the extreme versatility and homogenous properties of this material, we could use it to also create the functional bathroom furnishings, unifying them with the furniture.”