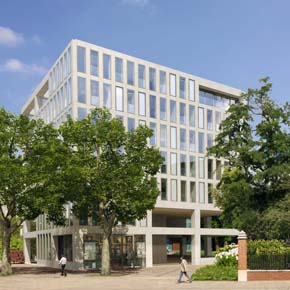 The tanks provide an effective drainage system that reduces the loading on the public sewers and complies fully with official run-off requirements set by the local authority and Thames Water.

Developed by real estate company Chelsfield, the apartments share the land with the new Design Museum site (formerly home to the Commonwealth Institute) – a Grade II-listed building boasting the largest parabolic copper roof in the world.

Due to the museum roof’s undulating design, rainwater collects at two focused locations. The drainage system is in place to siphon this water instantaneously to avoid build-up on the roof.

The siphonic outlets can achieve flow rates as high as 180l/s.

To meet criteria set by the Royal Borough of Kensington and Chelsea, the flow rate of surface water being discharged from the new development and the Design Museum roof to the public sewer network must stay within strict lower limits.

As part of its overall engineering remit, consultancy Arup was tasked with finding a safe, sustainable stormwater management solution for Hollandgreen.

“The parabolic roof of the Design Museum at Hollandgreen presented a unique drainage challenge for Chelsfield. Our task was to find a solution that would not only limit the discharge to the public sewer to 30% of the instantaneous run-off rate – and manage excess stormwater safely and effectively – but would also fit with the design and layout of the luxury development.

Together with the team at Graf UK, we were able to design a completely tailor-made system to do just that. Made up of two individual EcoBloc Flex tanks, it meets the project’s exact size and shape requirements.”

As the ground was clay heavy, attenuation tanks were specified to allow for ultimate control of water release back into the sewage system.

After Chelsfield was originally informed the site would need put to a system of 315m3, a detailed analysis carried out with Graf UK, combined with the use of the EcoBloc Flex tanks, meant that the requirements were fulfilled with a reduced storage capacity of just 212m3.

This resulted in significant financial savings and overall instantaneous discharge reduced to 70l/second.

EcoBloc Flex can be made to any custom size and can be positioned as shallow or as deep underground as required.

Its capacity of 60 tonnes is a must for the Hollandgreen development, as one of the main EcoBloc storage tanks is located on the direct approach to the Design Museum loading bay.

Even under extreme loads, it boasts a storage coefficient of 96%.

The tanks are designed with Vario shafts and in-built inspection channels to provide easy access for advanced camera technology. The cameras are used to periodically check for any silt or gravel build-up – ensuring optimum performance for the system’s lifetime.

Mike continues: “As well as ultimate ease and speed of installation, EcoBloc Flex offered us a hassle-free future maintenance solution – making it ideal for this forward-thinking development.

Its flexible, modular design also meant we were able to make it fit seamlessly with the existing drainage network by positioning it exactly where we needed it: lower than the water flow, but higher than the outlets into the sewers. The Graf UK team was similarly flexible – working closely with our design team to make sure the system ticked all the boxes, while keeping within the project’s tight timeframes.”

Graf UK’s national specification manager, Kevin Reed, added: “Hollandgreen’s new, custom-designed stormwater attenuation system showcases the true versatility of our EcoBloc Flex modules – and is a perfect example of how they can be used to overcome a whole host of drainage challenges.”