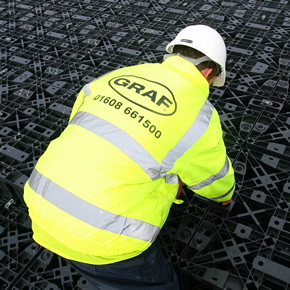 Graf UK has designed and specified an EcoBloc Flex stormwater tank to reduce flood risk and provide a rainwater drainage solution for a new 13-mile bypass in Morpeth, Northumberland.

The project’s contractors required a strong stormwater tank, with a high volume capacity. The specified solution had to be easy to inspect and maintain to ensure longevity.

The original proposition involved several four-metre diameter GRP tanks, which were to be placed up to nine metres underground, with four tanks either side of the road. However, these initial plans were deemed unsuitable: the size of these tanks, their connecting pipework and the depth of the install would have necessitated extensive evacuation.

After dismissing the original proposition, the project’s contractors consulted Graf UK for an alternate solution.

The EcoBloc Flex system allowed for the installation of one tank instead of eight; it could be placed higher in the ground, allowing for significant excavation savings. The elevated position of the new tank means that, when rainwater enters the collection manhole at full force, it only has a short drop into the system.

The rainwater from the road is collected by pipework in the bypass’s gullies, and fed it into the single EcoBloc Flex attenuation tank. A vortex flow controller is then used to discharge the water into the culvert at a controlled, slow speed.

EcoBloc Flex boasts the capacity to hold three times as much as a typical gravel infiltration ditch. Its tanks have a heavy-duty lorry-bearing capacity of up to 60 tonnes. Compact in design, it requires minimum space and soil excavation; it also provides a void ratio of 96 percent.

With an integrated shaft and inspection channels, the system can be monitored via standard drainage camera technology. This can be used to check for any silt build up that needs attention.

Graf UK’s Klaro E system provides a cleaning performance of up to 98 percent. It mechanically holds back solids in one chamber, and uses a separate sequencing batch reactor chamber to treat the wastewater. Microorganisms work to biologically clean the water, allowing sludge to sink to the bottom and a clarified water zone to form at the top.