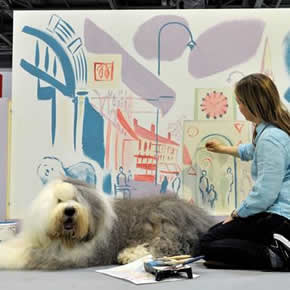 Dulux Trade has reported on its Ecobuild experience: it achieved a sustainable stand award win and announced its BES 6001 Responsible Sourcing achievement at the show, which took place earlier this week.

At this year’s Ecobuild event, Dulux Trade took the opportunity to announce that its parent company, AkzoNobel, has become the first global paint company to achieve BES 6001 Responsible Sourcing accreditation.

The standard, which is awarded by BRE, allows construction manufacturers to prove that their products have been made with sustainably-sourced constituent materials.

Dulux Trade’s Stowmarket factory site has been awarded BES 6001 Responsible Sourcing, warranting that the product portfolio manufactured on site meets BRE’s strict criteria. Achieving a ‘very good’ rating with regard to responsible sourcing, Dulux’s consideration of the environmental and ethical aspects of its ingredients has not gone unnoticed.

The company also celebrated an award win at Ecobuild: it was crowned the winner of the show’s Sustainability Stand Awards, in the ‘Stand Over 60m2’ category.

Designed by Dulux to inspire and educate, the stand comprised an experimental ‘community’ space, which was modelled on a small neighbourhood. An assortment of reusable materials, including recyclable aluminium frames and eco-friendly artificial grass, were used to construct the stand.

The ‘Neighbourhood Swatch’ stand also featured two classrooms: one with a standard design, and one with the design of a classroom under Dulux Trade’s Smarter Spaces initiative.

The stand was commended for demonstrating ‘excellent consideration of environmental and social impacts’. By displaying sustainably sourced materials from local businesses, the stand demonstrated strong supply chain management, which impressed the judges.

Now that the show is over, a number of the elements used on the stand – such as a bicycle, a microscope and several chairs – will be donated to a school in Slough. Three sections of the stand will be reused at other upcoming events.