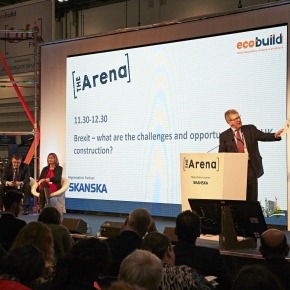 On the third and final day of Ecobuild 2017 (9th March), Brexit was high on the agenda with Lord Foster of Bath discussing what it means for the construction industry in terms of skills and upcoming projects.

If planned projects such as HS2 and Crossrail are to be a success then the industry must grow by 35%, according to Lord Foster, and the bigger firms are going to be hit by the apprenticeship levy. Therefore there are several issues that need solving.

Later in the day, James Thornton of ClientEarth took to the stage, to discuss how the company took the Government to court and won. During the session he explained that it is estimated 50,000 premature deaths every year, are the result of air pollution, costing the UK £27.5bn, yet the Government has no plans to tackle the issue.

In addition, he informed the audience that a consultation paper will be available in April outlining the Government’s latest response and plans going forward.

Autonomous cars and the future of urban transport were also hot topics on the final day. The link between electric vehicles, air pollution and existing road infrastructure was discussed by David Nelson of Foster + Partners, while Rachel Skinner of WSP and Institution of Civil Engineers described the vehicles as ‘transformational’.

The crowds continued to swarm Regeneration Drive and gathered around for the last instalment of the Future Materials series, Processes and Manufacturing, which explored research including the role of drones on the inspection and repair of smart cities, testing to understand weather robustness, and emerging software innovations to assess building performance.

Colin Powell of World-GBC discussed the organisation’s work on health and wellbeing in homes, including an outline of the latest evidence and the plans to launch a ‘Homes Wellbeing Lab’ in the UK, when he took to the stage at Ecobuild’s City Hall.

The focus over at The Gateway, however, was on looking ahead to the future of infrastructure and planning, and how technology will revolutionise the way we design, deliver, operate and maintain infrastructure.

Managing director at Ecobuild, Martin Hurn summed up the final day as a great way to close the show. He commented that it was good to see such packed crowds at The Arena for the sessions that covered the massive implications of Brexit on the construction sector and the issues that air pollution’s already causing in towns and cities.