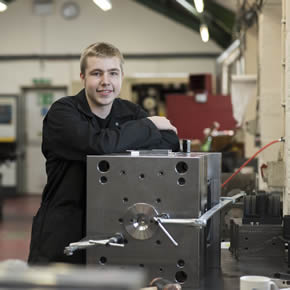 Cable cleat manufacturer, Ellis Patents has recently invested £200,000 in replacing its factory roof and expanding its tool room; the company has also appointed a new apprentice to develop its toolmaking services.

Based in North Yorkshire, Ellis Patents manufacturers and supplies cable cleats around the world; it has spent the past few years expanding its warehouse, factory and offices to reflect its global stature.

By investing in a new employee and an improved facility, the company hopes to maintain its impressive growth pattern and improve its toolmaking services.

The expansion of its tool room, and the recruitment of 17-year old Louis Hopper, has presented the company with the opportunity to increase its toolmaking capacity by 25%, allowing it to develop a vital area of its business.

Louis, who first came to Ellis on work experience, is the latest in its line of apprentices; another apprentice from the company, Adam Freer, was named Derwent Training Association’s Apprentice of the Year (Final year NVQ in the workplace).

The roof replacement has also benefited Ellis: resulting in the adoption of a forced fan system and improved natural lighting and ventilation, it has helped the company to reduce its carbon footprint.