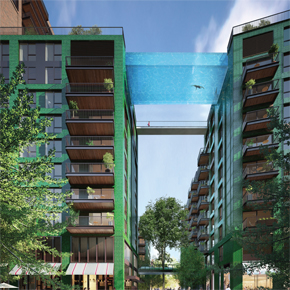 EcoWorld Ballymore has released 251 properties for sale at Embassy Gardens, the residential development adjacent to the new US Embassy at the heart of Nine Elms on the South Bank. In addition, Ballymore has announced the opening of the EG:LE club in Ambassador Building, which is now complete and 95% occupied. ABC+D finds out more… 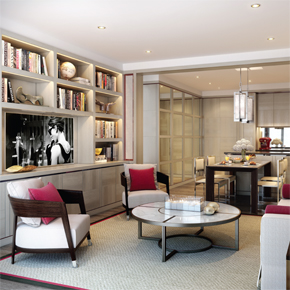 Ranging from studio suites to the stunning penthouse, the apartments offer buyers another opportunity to purchase in this stand-out development. Phase one was launched to great acclaim in 2012 and phase two, launched towards the end of 2015, is already sold out.

All residents of Embassy Gardens benefit from membership of the EG:LE club; an exclusive residents-only private members club which has recently been completed and is now open. EG:LE club raises the bar on residential development amenities in London – the facilities include a private gym and yoga studio, a boxing ring, a private cinema – The Maureen O’Hara – and a traditional private library and lounge area named after the Irish playwright – The John B. Keane.

In addition, the architecturally stunning Sky Pool and sky deck at the top of two of the buildings incorporates a spa, summer bar and the Orangery, which will bring the relaxed feeling of the Mediterranean to central London, allowing residents to relax in a private space which brings the outside in.

The design of Embassy Gardens is inspired by the red-brick exteriors of the meatpacking district of New York, and influenced by London’s historic Victorian and Edwardian mansion blocks. At the heart of Embassy Gardens’ ethos is craftsmanship, with interior details handcrafted from high quality materials such as light-coloured oak, marble and black granite. Spanish designer, Luis Bustamante, and Sean Mulryan, Chairman of Ballymore Group, collaboratively devised the interior design of the apartments, each one given individual consideration. Taking influence from Soho loft-style living and ensuring high quality finishes in every apartment, natural light will flood the apartments through floor-toceiling glass windows while an open-plan design creates a sense of space. Many also have striking views across the River Thames or the new US Embassy.

Embassy Gardens is set within the linear park – a ribbon of green, tree-lined space running from Vauxhall to Battersea Park, providing al fresco areas for residents and locals to enjoy. The park will include a variety of trees thoughtfully planted to evolve and change with the seasons. Providing an artistic focal point to this beautifully landscaped space are three recently unveiled sculptures, curated by Sir Norman Rosenthal and Ballymore. Including works by Sarah Lucas, Simon Fujiwara and Mohammed Ashfaq, the new artworks inject cultural vibrancy into Embassy Gardens and the surrounding area. 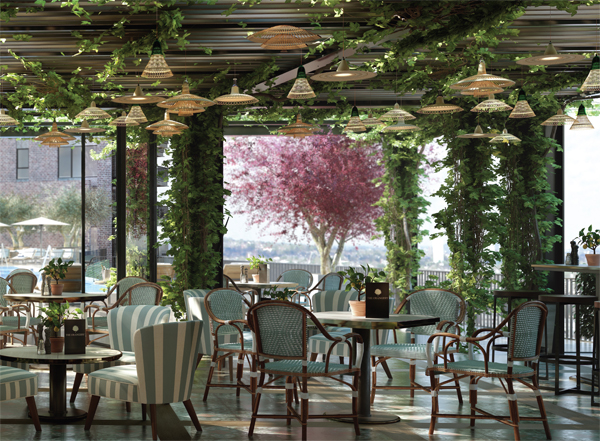 One of the leading developments in Nine Elms on the South Bank, Europe’s most significant regeneration zone stretching from Lambeth Bridge to Chelsea Bridge, Embassy Gardens will benefit from the £15bn regeneration which will transform almost 500 acres of underused land into a thriving new area within central London, boasting 6.5m sq ft of commercial space, 20,000 new homes, infrastructure, and community amenities. Embassy Gardens will sit adjacent to the new US Embassy and the Dutch Embassy – both of which are relocating to the area.

Nine Elms will also be one of London’s best-connected neighbourhoods; the extension to the Northern line will be open by 2020, while Vauxhall tube and rail stations are just a five minute walk away from Embassy Gardens and a planned pedestrian and cycle bridge will improve links to the north bank of the river, connecting residents to Belgravia and Pimlico in minutes.

Tan Sri Liew Kee Sin, chairman of EcoWorld Ballymore said: “Nine Elms on the South Bank is one of London’s prime residential riverfront locations, and Embassy Gardens represents an exceptional investment opportunity in one of London’s most desirable developments which will create an entirely new community within the city.”

EcoWorld Ballymore is formed of EcoWorld, one of Malaysia’s leading property developers and Ballymore, which has over 20 years’ experience in the London property market. The two companies share the vision of creating some of London’s most exciting and innovative residential developments. Their joint venture represents a careful balance of investment in three of the most important waterside development projects in London’s future, both east and west: Embassy Gardens, London City Island and Wardian London.