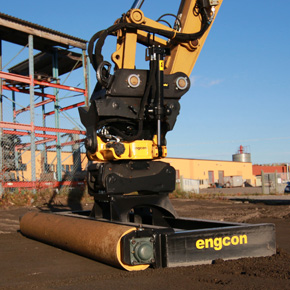 Engcon has launched a new GRB grading system to be used in conjunction with its latest generation of tiltrotators. 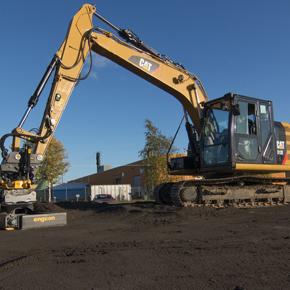 The Engcon GRB is comprised of steel beams that are used to level the grading surface. The rear section features an adjustable roller which then compacts the surface.

The GRB is the latest in an expanding range of excavator tools and attachments.

The grading beam’s screw-fitted mounting bracket is fastened using an identical bolt circle to the ones used on many other Engcon tools, from stone and sorting grapples to ground vibrators and rotating brushes, allowing operators to easily switch from one tool to another.

The new grading beam is available in three sizes – 2000mm, 2500mm and 3000mm. In addition, its side arms can be extended using Engcon’s 500mm extension kits, simplifying stockholding for Engon dealers as one model will cover all configurations.

Launched at PlantworX 2015, the Engcon tiltrotator can fully rotate a full 360° and tilt up to 45° in any direction to allow for more flexible and accurate operation. The tilting function in particular allows grading to be carried out precisely and in tight spaces.

Find out more about Engcon products