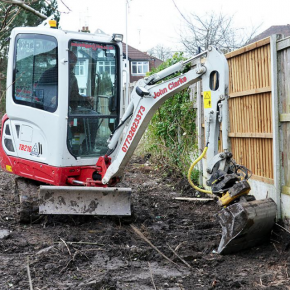 John explains that after stumbling across the Engcon videos on YouTube, he felt compelled to invest in an Engcon tiltrotator, hitch and buckets, immediately. Clarke comments: 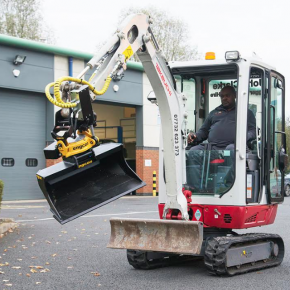 “The quick hitch and tiltrotator makes you think differently about your day. Because you can change your accessories so quickly, for me in about 4–5 minutes, you find yourself much happier about changing tools. So you make sure you’re using the right-tool for the right job, rather than making do with what’s fitted or grouping together all your jobs with a particular tool, which isn’t always great for the site manager.

“I’ve had my tiltrotator three months now. Originally, I alternated between the tilt and rotate functions due to the hydraulics on my diggers, but Engcon promised to work on a more refined system. True to their word, they did and it’s been installed: This gives me simultaneous tilt and rotate from a single hydraulic line and I believe I’m the first person in the UK to have this solution on a micro digger this small. I can’t praise the Engcon team enough for their support.”

Since his purchase, John has seen a significant improvement in the jobs he’s winning, with upto 85% of those he quotes for coming to him. In addition, the digger has negated the need to employ a shovel man, subsequently reducing John’s daily out costs.

Robert Hunt, Managing Director of Engcon UK comments: “John was very clear about his requirements and his budget. The hydraulic constraints of his diggers meant that, aside from a more sophisticated and costlier control system, we could only install a unit with limited functionality; but it got us thinking. Within 3 weeks, our UK Engineers had come up with a more advanced development and our Swedish team managed to productionise and CE-mark it 6 weeks after that. It’s a classic example of customer and market-led product development which has resulted in Engcon’s tiltrotators being more affordable and available to a wider market. This has also been a sound investment for John, enabling him to use his time far more productively, and increase his revenue. By our estimates, he’ll get a full return on his investment within the year.”