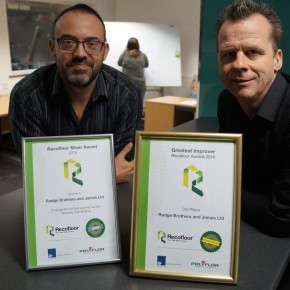 Recofloor’s annual 2017 awards event is now accepting nominations for members’ achievements within the vinyl flooring recycling scheme ahead of the ceremony at the Oval cricket ground on March 29th 2017.

Now in its seventh year, Recofloor has been responsible for the recycling and re-use of more than 3,000 tonnes of waste vinyl flooring. The scheme, originally set up by Polyflor and Altro, now has 700+ collectors and more than 60 drop-off points across the UK and Ireland.

Shortlisted candidates will be up for the Recofloor Gold, Silver and Bronze awards; calculated by the tonnage collected in relation to the average number of fitters employed by the company.

Individuals deemed to have gone the ‘extra mile’ to drive the scheme could be crowned Recofloor Champion, such as last year’s winner Mark Purnell of Fantasy Flooring in Bristol.

A multi-award winner of the Recofloor Awards, Rudge Brothers & James (pictured), has embraced the scheme for several years now, having hosted Recofloor training for its staff.

Rudge Director Jim Heal says: “This valuable training has helped our staff to understand what recycling we’ve done and how we can take this forward. It has fired their enthusiasm for the scheme and what we as a company can achieve.

Currently clean offcuts are sent back from our premises for recycling, but we are planning to engage Recofloor on site collections for our bigger flooring jobs in the future.”