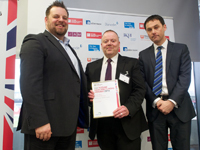 The awards are organised by EEF to commemorate businesses in the sector.

The ceremony was held at the A.J. Bell Stadium in Eccles at a congratulatory luncheon.

Crown Paints was awarded the Environmental Excellence title for its Earthbalance programme, which has been designed as a plan for greener manufacturing.

The programme was developed by Crown Paints to help it reach its target of reducing its Greenhouse Gas Emissions (GHG) by 10% at the end of 2015.

Through the programme, the company has achieved high percentage recycling rates, driven energy and waste reductions and secured zero waste to landfill.

Crown Paints has also celebrated other successes recently: it was awarded the Coatings Care Best Performance Award by The British Coatings Federation and achieved the Insiders Green Manufacturer of the Year.

It has also been presented with The Manufacturers Sustainable Manufacturer of the Year Award and the Supply Chain Sustainability School Gold standard in recent years.

Having won The Future Manufacturing Awards title for Environmental Excellence in the North West region, Crown Paints is now contending for the national award.

It will find out if it has been successful at a gala dinner in London, which is scheduled to take place on 15th April 2015.