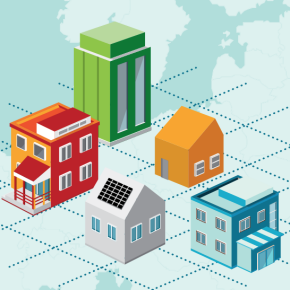 EU “not ready” for influx of smart buildings

The majority of countries within the European Union are not ready to take advantage of the benefits of smart building technology, according to a recent study by the think thank Buildings Performance Institute Europe (BPIE).

Following the introduction of the Paris Agreement, Europe’s building stock finds itself in a state of transition: departing from high-energy-consuming, fossil fuel-based systems towards one that is decentralised, consumer-focused and reliant on renewable energy in order to limit global warming to below 2°C.

Whilst the Energy Performance of Buildings Directive (EPBD) and the Energy Efficiency Directive (EED) have began promoting the implementation of smart meters and intelligent metering systems, the most recent findings by the BPIE suggest that European legislation is not going far enough to ensure all EU Member States are primed and ready for the pending smart building revolution.

In fact, only Sweden, Finland, Denmark and the Netherlands are deemed to be “smart ready”, having implemented a string of progressive approaches to decarbonise their respective energy systems through taxation, subsidies, stricter building regulations and investments in renewable energy.

The term “smart buildings” describes premises with flexible energy systems that can efficiently store, use and generate energy by utilising leading technologies such as smart meters, solar panels and demand response software.

A prime example of how these countries have adapted to the shift towards an energy-efficient building environment can be seen at The Edge, a smart office building in Amsterdam that uses 70 percent less electricity than comparable office buildings. The Edge incorporates the largest array of PV panels in any office building in Europe, and features an aquifer thermal energy storage system that provides all of the energy needed for heating and cooling.

The building and its users are connected by a smartphone app that can direct users to available parking spots, tweak the environment according to individual preferences for light and temperature  and even find them a desk.

The Edge is regarded as one of the greenest and most intelligent buildings in the world.

Elsewhere, Sweden, Finland and Italy have already completed their rollout of smart meters, whilst the UK and France are encouraging demand response activities and Denmark is leading on green district heating.

A step in the right direction

Despite progress, the widespread adaptation of smart technologies within Europe’s built environment remains challenging prospect for most governments. Smart infrastructure is not in place, and the vast majority of the existing building stock has not been constructed with future technologies in mind. 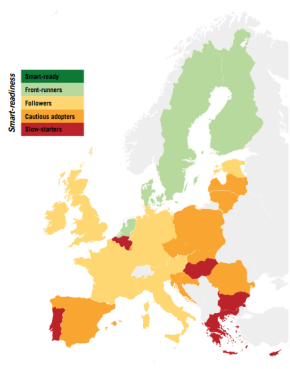 When the European Commission published its new clean energy package in December 2016, it admitted that if the trading bloc continues to develop its existing building stock at the current rate of one percent of buildings each year, it will take one hundred years to upgrade the total stock to near-zero energy levels.

Whilst the BPIE report welcomes the introduction of a ‘smartness indicator’ on energy performance certificates to highlight building’s green capabilities; the think tank concedes that current EU legislation lacks sufficiently ambitious drivers to effectively facilitate the development of a smart building stock by 2050.

The BPIE suggests that the development of an electricity market with more flexible pricing, in addition to more renewable energy, localised generation and storage capacity measures must be encouraged by EU legislation to intensify the transition to smart buildings.