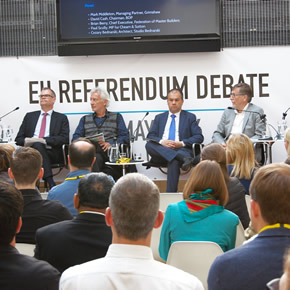 The pros and cons of Brexit were debated at the latest UK Construction Week advisory panel, which discussed the EU Referendum and its relationship to international trade, the housing crisis and the skills shortage.

The event was structured around the findings of UK Construction Week’s EU Referendum survey, which received over 3,000 respondents. Of the construction professionals that took part, 57% expressed a desire to stay in the EU; the remaining 43% are backing the leave campaign.

The debate took place at Grimshaw Architects’ head office on 26th May, in conjunction with World Architecture News. It was hosted by Brian Kilkelly, Development Lead of Climate KIC and Founder of World Cities Network.

The panel began by addressing the housing crisis. Whilst many contractors believe that the issue would be made better by leaving in the EU, the panel appeared to rebuke this: David Cash, Chairman of Building Design Partnership (BDP), argued in favour of staying in the EU, highlighting the economic stability that this would bring.

According to UK Construction Week’s survey, two-thirds of architects believe that UK companies would be gravely affected by the loss of EU funding if Britain were to leave. Cash used this statistic to support his argument.

Ultimately, the panellists agreed that the housing crisis was not a result of being part of the EU: Brian Berry concluded the discussion by placing the blame on inadequate construction output levels, longer life expectancies and the increased number of people choosing to live individually.

A divide in opinion occurred when the panel’s discussion moved on to the skills shortage. Whilst Kilkelly believes that Britain’s EU membership allows for the easy transfer of knowledge between different countries, Paul Scully, MP for Cheam and Sutton, argued that Brexit would widen the talent pool beyond the EU.

Scully also believes that, by leaving the EU and its procurement process, a larger percentage of smaller British firms and local contractors will get a larger slice of major project work.

His optimism is reflected in the survey results, which shows that two-thirds of architects, managing directors and business owners believe that leaving the EU will provide the UK and its construction workers with additional opportunities.

Despite this, 50% of those surveyed believe that Brexit would exacerbate the skills shortage. Interestingly, architect Cezary Bednarski believes that leaving the EU would have no effect on the issue: increased boarder control would allow the UK to let skilled workers in as required. 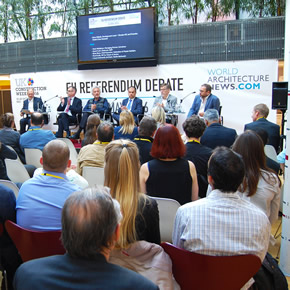 The UK’s continued trading relationship with the EU was a concern for Mark Middleton, Managing Partner of Grimshaw Architects. He argued that trade deals cannot be made overnight; leaving the EU would call for complete renegotiation, which would hamper business in the short-term.

Scully countered this, arguing that a growing proportion of the UK’s international trading is outside the EU. He believes that, as distribution and infrastructure improves globally, EU trade will become less relevant.

According to Scully, EU bureaucracy often slows down business and trade: he highlighted Britain’s on-going trading negotiations with Canada, which have been active for a number of years with no resolution.

Alternatively, Berry suggested that the process of the UK’s Referendum could encourage the EU to look at its international trading deals and get them in order. He also argued that, when it comes to deals and legislation, it would be better for Britain to have a seat at the EU’s table.

Berry’s views are mirrored in the survey results: only 13% of respondents believe that leaving the EU would have a positive impact on UK based companies trading with Europe.

As the event concluded, Scully and Bednardski voted leave. According to UK Construction Week’s EU Referendum survey, sub-contractors are also likely to vote leave: 70% of contractors surveyed believe that leaving the EU would strengthen the case for greater support for UK manufacturing from the government.

Meanwhile, Berry, Cash and Middleton voted remain, supporting the opinion of the majority. The survey revealed that Brexit could potentially have a negative impact on the cost of imported materials, cash flow for inward investments for new developments and major infrastructure projects, such as Heathrow, CrossRail and HS2.