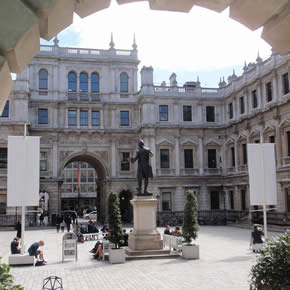 Wrightstyle has been contracted to supply and install a number of advanced external glazing systems at the Royal Academy of Arts.

The Royal Academy of Arts is an institution of both national and cultural importance. It is currently undergoing a multi-million pound redevelopment to link two of its buildings – Burlington House and a property in Burlington Gardens – together.

The extension was designed by David Chipperfield; John Sisk & Son has been appointed as the project’s primary contractor.

Scheduled for completion in 2018, the revitalised academy will be finished in time for its 250th anniversary. For the first time, visitors to the institution will be able to walk from Piccadilly to Mayfair through an assortment of artistic spaces.

Wrightstyle has been appointed to supply glazing systems for the prestigious refurbishment project. Having previously completed the frontage to King’s Cross station, and recently started work on a Tower Bridge project, the company has experience in dealing with historic and significant buildings.

The external glazing contract will also feature systems from Secco Sistemi, which named Wrightstyle its fabricator and supplier earlier this year. Based in Italy, Secco Sistemi produces designer systems for facades, doors and windows, which are used frequently in historic building refurbishment projects.

Wrightstyle expects to complete the Royal Academy contract in three phases, by spring 2017.