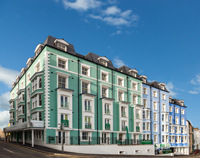 Tenby’s new apartment block was built on the site of the demolished Royal Gatehouse Hotel, which was an important landmark before it was damaged in a fire several years ago.

Anglo Holt Construction was tasked with designing and building the establishment, which was to hold 38 luxurious apartments.

To ensure a low carbon footprint, a concrete portal frame with a Metframe pre-panelised system was used in the construction of the building.

Working alongside Systex UK, Wetherby was responsible for decorating the exterior of the building as well as insulating it.

To do so, the company provided its Epsitec system, which is comprised of 175mm EPS insulation and has been designed with a 25mm drainage cavity.

The insulation was finished with WBS 1.5mm Silicone ‘K’ in shades of green and blue to create a colourful exterior that suited the aesthetics of the seafront.