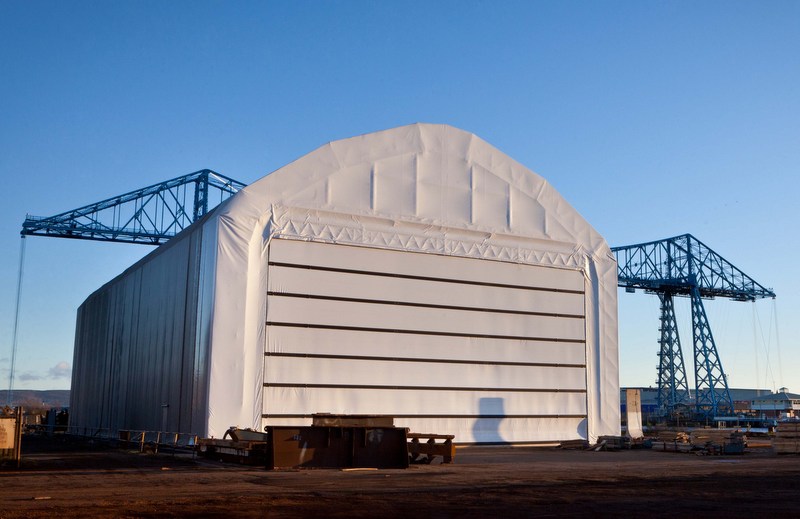 The buildings in question are two BVL structures previously used by Swan Hunter along the River Tyne, Newcastle, to carry out shipbuilding tasks.

They now form a part of Wilton Engineering Services’ site along the River Tees, Middlesbrough.

The pair of BVL structures, also known as the Swan Hunter Shipyard buildings, were manufactured by Rubb Buildings back in 1982.

The structures, which spanned 27-metres, were 24 metres in length and had 11.7 metres high sidewalls, were used by Swan Hunter as a means for housing ships that the company were manufacturing.

Throughout this period, they dominated the Newcastle upon Tyne skyline.

Unfortunately, when shipbuilding at the Wallsend yard ceased in the early years of the new millennium, the BVL structures were dismantled and put into storage.

Wilton Engineering Services, a specialist in engineering design, fabrication and construction, analysis and coating services for the energy industry, made the decision to bring the Swan Hunter Shipyard back to life in 2014.

However, they requested two main changes:

Roller and track system no longer being needed

When the BVL structures were used by Swan Hunter, they were designed with a roller and track system that enabled them to slide along the Wallsend dock with ease.

As the tasks that Wilton Engineering Services will be carrying out would never require the buildings to move around, the decision was made not to re-install the roller system.

Bringing two buildings into one

Linked to the roller and track system was the fact that the two BVL structures were able to butt against each other to form a solitary enclosure when required.

However, during the re-installation process, Wilton Engineering Services tasked Rubb Buildings to permanently bring the two buildings together. PVC sheets were added to the front gable of the structure, while another part has been left open to make it easy to transport parts and equipment.

On the closed side of the structure, Rubb Buildings installed a Heli-Door system complete with rakers.

This design enables the wind load to be easily transferred to the foundations, meaning there was no need to change the existing building system despite a point load being introduced from the door prop.

Rubb Buildings’ Sales Manager, Andy Knox: It’s great to see these buildings back in operation. This, along with the fact that they have lasted 32 years in challenging industrial environments, is testament to the design and quality we produce here at Rubb Buildings.