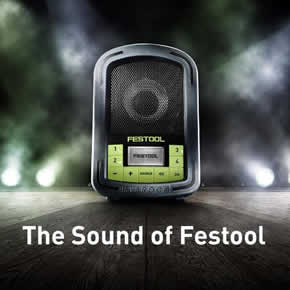 To celebrate the launch of its SYSROCK BR10 Site Radio, Festool has contrived a competition for its customers, giving them the opportunity to win thousands of pounds worth of its tools.

Entitled ‘Singing to the Sound of SYSROCK’, the campaign will reward one entrant with £5,000 worth of Festool power tools; two runner-up winners will also take away £1,500 worth of tools.

Singing to the Sound of SYSROCK

The company is asking tradespeople to submit a clip of them singing along to one of the SYSROCK songs, as selected by tradespeople at the end of last year.

Entrants have 20 songs to choose from; they can download the lyrics and backing track from Festool’s website, where they will also be able to upload their finished video.

Festool’s judging panel will create a shortlist of the best videos, and the competition will open for public voting on 24th February.

The campaign will be advertised on TalkSPORT radio station.